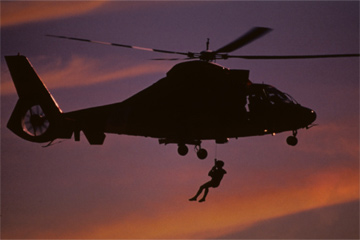 The ability to hover is critical to all the daring operations that helicopters take part in. Here, a brave worker dangles from the U.S. Coast Guard HH-65 rescue helicopter.
Erik Simonsen/Photographer's Choice/Getty Images

The defining characteristic of a helicopter is its ability to hover at any point during a flight. To achieve hovering, a pilot must maintain the aircraft in nearly motionless flight over a reference point at a constant altitude and on a heading (the direction that the front of the helicopter is pointing). This may sound easy, but it requires tremendous experience and skill.

Before we tackle the technique of hovering, let's take a moment to discuss nap-of-the-earth (NOE) flight, another unique characteristic of helicopters. NOE flight describes a helicopter located just above the ground or any obstacles on the ground. Military pilots perfected the technique during Vietnam as a means to become more elusive to ground-based weapons. In fact, film footage from the era often shows helicopters rapidly skimming the Earth's surface, machine-gunners firing from open rear doors or hovering with their skids just a few feet off the ground as troops disembark at a target location.

Of course, any helicopter taking off or landing must undertake NOE flight, if only for a few moments. It's a particularly critical time for a helicopter because a wild attitude adjustment could tip the craft too far and bring the rotor blades in contact with an obstacle. Attitude, for our purposes, refers to the helicopter's orientation in relation to the helicopter's direction of motion. You'll also hear flight-minded folks talk about attitude in reference to an axis, such as the horizon.

With that said, here's the basic technique to bring a helicopter into a hovering position:

To maintain a stabilized hover, the pilot must make small, smooth, coordinated corrections on all of the controls. In fact, one of the most common errors of novice pilots is to overcompensate while trying to hover. For example, if the helicopter begins to move rearward, the pilot must be careful not to apply too much forward pressure on the cyclic because the aircraft will not just come to a stop but will start drifting forward.

Over the years, innovations in helicopter design have made the machines safer, more reliable and easier to control. The next page presents a few of these innovations to provide a glimpse of how far helicopters have come and where they might go in the future.