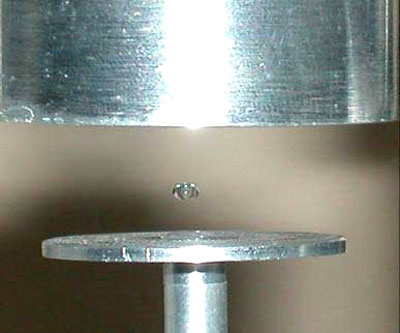 Unless you travel into the vacuum of space, sound is all around you every day. But most of the time, you probably don't think of it as a physical presence. You hear sounds; you don't touch them. The only exceptions may be loud nightclubs, cars with window-rattling speakers and ultrasound machines that pulverize kidney stones. But even then, you most likely don't think of what you feel as sound itself, but as the vibrations that sound creates in other objects.

The idea that something so intangible can lift objects can seem unbelievable, but it's a real phenomenon. Acoustic levitation takes advantage of the properties of sound to cause solids, liquids and heavy gases to float. The process can take place in normal or reduced gravity. In other words, sound can levitate objects on Earth or in gas-filled enclosures in space.

To understand how acoustic levitation works, you first need to know a little about gravity, air and sound. First, gravity is a force that causes objects to attract one another. The simplest way to understand gravity is through Isaac Newton's law of universal gravitation. This law states that every particle in the universe attracts every other particle. The more massive an object is, the more strongly it attracts other objects. The closer objects are, the more strongly they attract each other. An enormous object, like the Earth, easily attracts objects that are close to it, like apples hanging from trees. Scientists haven't decided exactly what causes this attraction, but they believe it exists everywhere in the universe.

Second, air is a fluid that behaves essentially the same way liquids do. Like liquids, air is made of microscopic particles that move in relation to one another. Air also moves like water does -- in fact, some aerodynamic tests take place underwater instead of in the air. The particles in gasses, like the ones that make up air, are simply farther apart and move faster than the particles in liquids.

Third, sound is a vibration that travels through a medium, like a gas, a liquid or a solid object. A sound's source is an object that moves or changes shape very rapidly. For example, if you strike a bell, the bell vibrates in the air. As one side of the bell moves out, it pushes the air molecules next to it, increasing the pressure in that region of the air. This area of higher pressure is a compression. As the side of the bell moves back in, it pulls the molecules apart, creating a lower-pressure region called a rarefaction. The bell then repeats the process, creating a repeating series of compressions and rarefactions. Each repetition is one wavelength of the sound wave.

The sound wave travels as the moving molecules push and pull the molecules around them. Each molecule moves the one next to it in turn. Without this movement of molecules, the sound could not travel, which is why there is no sound in a vacuum. You can watch the following animation to learn more about the basics of sound.

Click the arrow to move on to the next slide.

Acoustic levitation uses sound traveling through a fluid -- usually a gas -- to balance the force of gravity. On Earth, this can cause objects and materials to hover unsupported in the air. In space, it can hold objects steady so they don't move or drift.

The process relies on of the properties of sound waves, especially intense sound waves. We'll look at how sound waves become capable of lifting objects in the next section.

The Physics of Sound Levitation 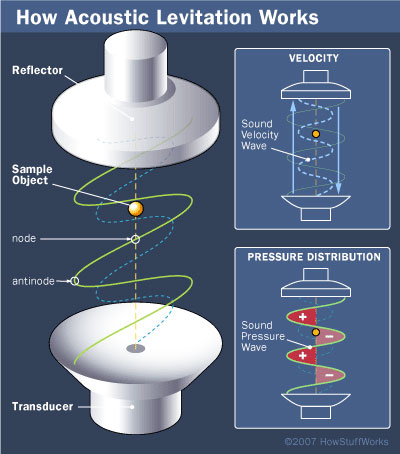 A basic acoustic levitator has two main parts -- a transducer, which is a vibrating surface that makes sound, and a reflector. Often, the transducer and reflector have concave surfaces to help focus the sound. A sound wave travels away from the transducer and bounces off the reflector. Three basic properties of this traveling, reflecting wave help it to suspend objects in midair.

First, the wave, like all sound, is a longitudinal pressure wave. In a longitudinal wave, movement of the points in the wave is parallel to the direction the wave travels. It's the kind of motion you'd see if you pushed and pulled one end of a stretched Slinky. Most illustrations, though, depict sound as a transverse wave, which is what you would see if you rapidly moved one end of the Slinky up and down. This is simply because transverse waves are easier to visualize than longitudinal waves.

Second, the wave can bounce off of surfaces. It follows the law of reflection, which states that the angle of incidence -- the angle at which something strikes a surface -- equals the angle of reflection -- the angle at which it leaves the surface. In other words, a sound wave bounces off a surface at the same angle at which it hits the surface. A sound wave that hits a surface head-on at a 90 degree angle will reflect straight back off at the same angle. The easiest way to understand wave reflection is to imagine a Slinky that is attached to a surface at one end. If you picked up the free end of the Slinky and moved it rapidly up and then down, a wave would travel the length of the spring. Once it reached the fixed end of the spring, it would reflect off of the surface and travel back toward you. The same thing happens if you push and pull one end of the spring, creating a longitudinal wave.

Standing sound waves have defined nodes, or areas of minimum pressure, and antinodes, or areas of maximum pressure. A standing wave's nodes are at the heart of acoustic levitation. Imagine a river with rocks and rapids. The water is calm in some parts of the river, and it is turbulent in others. Floating debris and foam collect in calm portions of the river. In order for a floating object to stay still in a fast-moving part of the river, it would need to be anchored or propelled against the flow of the water. This is essentially what an acoustic levitator does, using sound moving through a gas in place of water.

In space, where there is little gravity, floating particles collect in the standing wave's nodes, which are calm and still. On Earth, objects collect just below the nodes, where the acoustic radiation pressure, or the amount of pressure that a sound wave can exert on a surface, balances the pull of gravity.

Objects hover in a slightly different area within the sound field depending on the influence of gravity.

It takes more than just ordinary sound waves to supply this amount of pressure. We'll look at what's special about the sound waves in an acoustic levitator in the next section.

Other Uses for Nonlinear Sound

Ordinary standing waves can be relatively powerful. For example, a standing wave in an air duct can cause dust to collect in a pattern corresponding to the wave's nodes. A standing wave reverberating through a room can cause objects in its path to vibrate. Low-frequency standing waves can also cause people to feel nervous or disoriented -- in some cases, researchers find them in buildings people report to be haunted.

But these feats are small potatoes compared to acoustic levitation. It takes far less effort to influence where dust settles or to shatter a glass than it takes to lift objects from the ground. Ordinary sound waves are limited by their linear nature. Increasing the amplitude of the wave causes the sound to be louder, but it doesn't affect the shape of the wave form or cause it to be much more physically powerful.

However, extremely intense sounds -- like sounds that are physically painful to human ears -- are usually nonlinear. They can cause disproportionately large responses in the substances they travel through. Some nonlinear affects include:

Nonlinear acoustics is a complex field, and the physical phenomena that cause these effects can be difficult to understand. But in general, nonlinear affects can combine to make an intense sound far more powerful than a quieter one. It is because of these affects that a wave's acoustic radiation pressure can become strong enough to balance the pull of gravity. Intense sound is central to acoustic levitation -- the transducers in many levitators produce sounds in excess of 150 decibels (dB). Ordinary conversation is about 60 dB, and a loud nightclub is closer to 110 dB.

Levitating objects with sound isn't quite as simple as aiming a high-powered transducer at a reflector. Scientists also must use sounds of the correct frequency to create the desired standing wave. Any frequency can produce nonlinear effects at the right volume, but most systems use ultrasonic waves, which are too high-pitched for people to hear. In addition to the frequency and volume of the wave, researchers also must pay attention to a number of other factors:

This might sound like a lot of work required to suspend small objects a few centimeters off of a surface. Levitating small objects -- or even small animals -- a short distance might also sound like a relatively useless practice. However, acoustic levitation has several uses, both on the ground and in outer space. Here are a few:

Researchers continue to develop new setups for levitation systems and new applications for acoustic levitation. To learn more about their research, sound and related topics, check out the links on the next page.

Although a levitator with one transducer and one reflector can suspend objects, some setups can increase stability or allow movement. For example, some levitators have three pairs of transducers and reflectors, which are positioned along the X, Y and Z axes. Others have one large transmitter and one small, movable reflector; the suspended object moves when the reflector moves.