Women and The Citadel 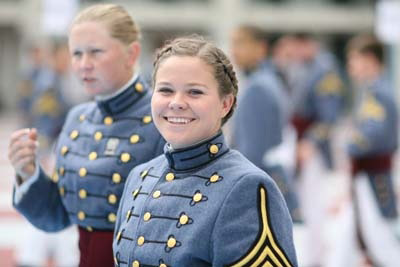 Before 1995, female cadets had yet to set foot on The Citadel campus in Charleston.
Photo courtesy Russell K. Pace/The Citadel

­Although women have taken evening classes in The Citadel's graduate school since 1966, none had been admitted to the Corps of Cadets. That changed in 1994 when Shannon Faulkner applied and was accepted for admission. She had left her gender information off the application. When it was discovered that she was a woman, The Citadel revoked her offer, so Faulkner filed suit against The Citadel to gain admission.

In her court case, Faulkner's lawyers argued that she was entitled to admission under the equal protection clause of the U.S. Constitution. Citadel lawyers argued that separate, but equal military education wasn't provided because there was little demand for military education for women. The court rejected The Citadel's arguments, clearing her way to attend the school under court order. Faulkner became the first female knob in 1995, but resigned a few days into her first week. A similar case occurred about this time that forced the Virginia Military Institute to open its doors to women. On June 28, 1996, two days after the U.S. Supreme Court's decision in United States v. Virginia, The Citadel's governing board voted unanimously to remove a person's gender as a requirement for admission.

In the summer of 1996, four women enrolled at The Citadel. Two would later drop out, alleging they were harassed and hazed by cadets. They subsequently sued The Citadel over the incidents; one lawsuit was settled while the other was dismissed. The Citadel has since instituted training and instruction designed to prevent hazing and sexual harassment.

In 1999, Cadet Nancy Mace, who was one of those first four women after Shannon Faulkner, became the first female cadet to graduate from The Citadel. She was followed by Cadet Petra Lovetinska in 2000. Upon graduation, Lovetinska, a Czech national who was granted U.S. citizenship, attended Marine Corp Officer Candidate School and was made a Marine second lieutenant, making her the first female Citadel graduate commissioned in the U.S military. Since those first women enrolled, more than 145 have graduated from The Citadel. As of fall 2008, 134 female cadets made up 6.4 percent of the Corps of Cadets. Today, women are members of every company in the Corps and can be found in classrooms throughout campus.

­Hup to for more articles on topics you might find interesting, like the Army Rangers, mercenaries and the French Foreign Legion.