What is cosmological redshift? 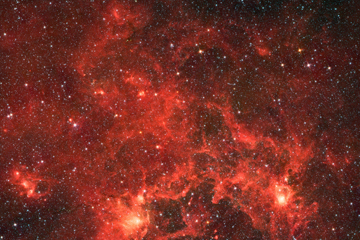 As light waves move away from us, they elongate and shift into lower frequencies.
Universal History Archive/UIG via Getty Images

To get a feel for redshift, it might be best to move away from light (pun intended) and recall a similar audio effect that we experience often in our daily lives. We'll start with a car. More specifically: a car's horn. But don't bother getting in the car and buckling up; pretend you're a street urchin playing stickball in your neighborhood. Your pal spots a car making its way down the road, and you've cleared to the sidewalk. But the driver is laying on the horn as she passes. What do you hear? As the car approaches from far away, the sound is at a higher register, but as it speeds past you, the pitch dips lower. This is called the Doppler effect. As a sound moves toward you, the sound waves are shorter and will have a higher frequency. As they move farther, they spread out, and the pitch lowers.

Light reacts much the same. As they approach us, the waves of light compress and have higher frequencies. As they move away from us, the light waves elongate and shift into lower frequencies. The short, approaching light is called a blueshift, while the longer, receding light is called a redshift. So there you go! Redshift is light that is moving away from you. Our work is here is done. Time for happy hour.

OK, perhaps not. Why do we call the redshift red and the blueshift blue? It's not just that we think it's more poetic than calling the short wave "Stan" and the long waves "Harry." On the electromagnetic spectrum, red light has a low frequency, and blue light has a high frequency. So when light is moving away from us, it's shifting toward the red end of the spectrum. If it's moving toward us, it's shifting toward blue.

Now, what's the cosmological stuff have to do with it? It's simply showing redshift on a big, big stage. The Big Bang explosion was so massive that most things we can see in the universe are still moving away from us. (Some things nearby -- planets or stars -- are moving closer.) The farther they are from us, the faster they move. So, cosmological redshift means that light stretches as space expands. In fact, it stretches so much that by the time we get to some distant galaxies, their visible and ultraviolet light has shifted to the infrared spectrum. Infrared telescopes like the James Webb Space Telescope -- set to launch in 2018 -- will help us see farther into the universe and allow us to study the young galaxies that are moving so far from us.

Entropy: The Invisible Force That Brings Disorder to the Universe
What Makes This Video of Things Melting So Satisfying?
The Chinese Are a Magnet Superpower