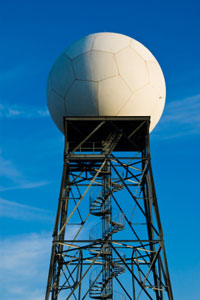 If you like riddles, you'll like this one: How can a musician playing a single note on a horn change that note without changing the way he or she plays that note? At first, you might think this is a trick question. Clearly, the musician must do something to change the pitch, right? Wrong. If the musician plays the same note while moving toward or away from a stationary listener, the note heard by the listener will indeed change -- even if the musician does nothing different.

Dutch scientist Christoph Hendrik Diederik Buys Ballot conducted this very experiment in 1845. He assembled a group of horn players and placed ­them in an open cart attached to a locomotive. Then ­he had the engineer start up the locomotive so it could carry the cart, complete with the horn players, back and forth along the track. As they were being pulled, the musicians played a single note on their horns. Ballot stationed himself beside the track and listened carefully, both as the train approached and receded. And the notes he heard were different than the notes being played by the musicians.

Although unusual, Ballot's experiment demonstrated clearly one of the most important wave phenomena known to scientists. The phenomenon is called the Doppler effect after Austrian mathematician Christian Johann Doppler, who first predicted this odd behavior of sound in 1842. Today, scientists know that the Doppler effect applies to all types of waves, including water, sound and light. They also have a good idea why the Doppler effect occurs. And they've incorporated its principles into a variety of useful tools and gadgets.

In this article, we'll examine everything Doppler: the man, the science and the technologies. But first we have to lay some groundwork. Because the Doppler effect is a phenomenon associated with waves, let's start by covering some basics about the two basic types of waves -- light and sound.­