by Gallagher Flinn
Prev NEXT
5 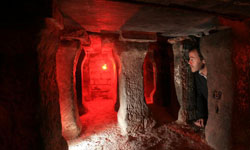 Some Roman hypocausts are still (mostly) intact. These were discovered beneath the city of Chester, England, in 2008.
Christopher Furlong/Getty Images

Controlling the temperature in any building efficiently is one of the hardest engineering tasks humans have had to deal with, but the Romans had it solved -- or at least, almost solved. Employing an idea that we still use to this day in the form of radiant heat flooring, hypocausts were sets of hollow clay columns spaced every few feet below a raised floor through which hot air and steam were pumped from a furnace in another room.

Unlike other, less advanced heating methods, hypocausts neatly solved two of the problems that have always been associated with heating in the ancient world -- smoke and fire. Fire was the only available source of heat, but it also had the unfortunate side effect of burning down buildings from time to time, and smoke from an indoor flame can be deadly in a closed space. However, because the floor was raised in a hypocaust, hot air from the furnace never actually came into contact with the room itself. Rather than entering the room, the heated air was piped through hollow tiles in the walls. As it passed out of the building, the clay tiles absorbed the heat, leaving the room itself steamy and Roman toes toasty warm.