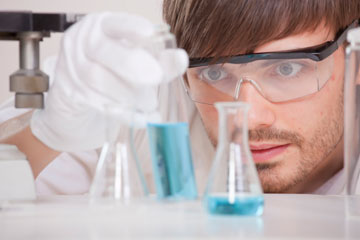 DNA analysis can help bioarchaeologists follow a genetic trail that helps them reconstruct a population's movement and reproduction patterns and find other clues to how ancient people lived.
©iStockphoto/Thinkstock

Bioarchaeologists employ several modern technologies to aid their work. X-rays, for example, find details in both structure and damage in bones and teeth.

Scientists can reconstruct diet using techniques such as stable isotope analysis. For example, they might use a mass spectrometer to vaporize samples, which break down into various isotopes, or particles of an element that differ in their molecular weight. The ratio of heavier particles to lighter ones for the same element helps determine what sort of carbon or nitrogen a person consumed in his or her lifetime. A high ratio of nitrogen isotopes can point to a meat-heavy diet; a high ratio of carbon isotopes can indicate consumption of plants like maize or sorghum, while a low ratio of carbon isotopes can indicate consumption of other plants like potatoes or wheat.

Genetics is another high-tech way to analyze population histories. DNA from human remains can be used to determine the sex of individuals, genetic relatedness and can even be used to infer marriage patterns. Ancient DNA can also be combined with analyses of other isotopes, from elements like strontium, oxygen, and lead, to investigate prehistoric population movements.

With ancient DNA, researchers might establish different lineages within a burial ground. That kind of information -- matched with other knowledge about grave monuments, burial orientation and corpse handling -- assists them in building a story about the social organization of an ancient population.

For example, a grave filled with all sorts of goodies and treasures, or with a bigger monument or marker, near others that are relatively barren, suggests preferential handling of a person perceived as more important in a society. These signs are indicators of a culture that recognizes differences in status. That kind of information can help scientists reassemble a societal hierarchy. Similarly, a grave that has a skeleton with isotope ratios that suggest a different diet, different birthplace, and with different goodies and treasures than nearby graves, suggests a foreigner who immigrated to the population. Scientists can take that kind of information to reconstruct a societal hierarchy.

As they develop their knowledge bases and expand our understanding of ancient civilizations, bioarchaeologists sometimes encounter resistance. Click over to the next page to find out why some people aren't too keen on scientists sifting through their ancestors' remains.