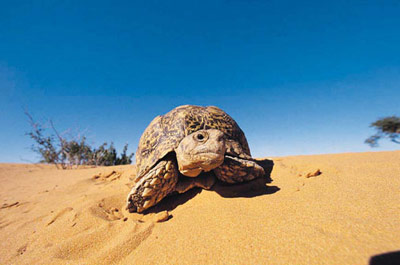 Were dinosaurs cold and slow, like a tortoise?
Getty Images

While teeth and bones can offer clues about what dinosaurs ate and how they moved, there are a lot of details we don't know about their physiology. One large question, which encompasses several smaller questions, is whether dinosaurs were warm-blooded, like birds and mammals, or cold-blooded, like reptiles.

These aren't scientific terms, and they don't have anything to do with the actual temperature of an animal's blood. Instead, they're descriptions of how an animal uses energy and regulates its body temperature. A warm-blooded animal controls its own body temperature with techniques like sweating and burning stored nutrients. They're endotherms -- their heat comes from within. These animals burn energy quickly, or have a relatively high metabolism. They also maintain a relatively consistent temperature, or are homeothermic.

Or were they warm and swift, like a hare?
Getty Images

So, are dinosaurs homeothermic endotherms, or are they poikilothermic ectotherms? Scientific opinion has shifted through the years. In the late 1800s, when scientists began theorizing that dinosaurs evolved into birds, people thought dinosaurs must be warm-blooded like their avian relatives. But beginning in the 1920s, people began to view dinosaurs as reptiles -- and obsolete reptiles at that. The reasons behind this change are murky, and they may have been influenced by public opinion. But the idea that dinosaurs were cold-blooded, slow and not very smart began to overshadow the idea that they were intelligent, swift and agile like birds.

Today, the idea that dinosaurs evolved into birds is back in the scientific forefront -- but there's still ongoing debate about their metabolism. Here's a run-down of some common arguments:

­­­­Since no one can study dinosaurs in the wild, it's unlikely that scientists will find conclusive proof any time soon.

Next, we'll look into how the bird-versus-mammal question also applies to dinosaurs' reproduction and parenting.

Most people have grown up with the idea that Tyrannosaurus rex was an enormous, aggressive, bloodthirsty predator. However, some scientists argue that T. rex wouldn't have been at all successful as a predator. Its arms are virtually useless in any hunting scenario, and its body is so large that it could have been fatally injured after a simple fall. Instead, T. rex might have been a scavenger. Its large teeth and jaws may have been devoted to chewing through the bones left from other animals' kills.