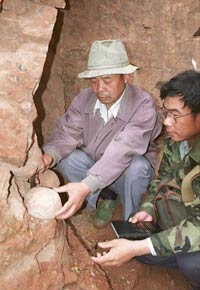 Wang Zhenghua (left), curator of a local museum, and Wang Fangchen, a scientist from Beijing, remove a fossilized dinosaur egg from a mountainside in Yunxian in central Hubei province.
Getty Images

When scientists study dinosaurs, they make inferences, or draw logical conclusions, based on physical evidence and the way other life forms behave. One inference is that dinosaurs reproduced sexually and laid eggs. This is logical for several reasons:

Matching an egg with its parent is difficult. Researchers have to open lots of eggs to find just one embryo. On top of that, large dinosaurs changed dramatically between hatching from eggs and becoming full grown, so even a perfect embryo doesn't guarantee a match. Also, paleontologists have discovered far fewer distinct eggs than species of dinosaurs, so it's possible, though relatively unlikely, that some dinosaurs gave birth to live young.

But even if an egg's species is unknown, it can still provide insight into how dinosaurs lived. First, like both birds and reptiles, dinosaurs built nests. While some fossil nests are haphazard piles of eggs surrounded by soil and debris, others hold intricately arranged patterns of eggs. Some excavations have revealed sites with multiple layers of eggs and nests. In some species, dinosaur parents tended their nests carefully and returned to a common nesting ground year after year.

The nests themselves give researchers an idea of how the eggs developed and matured. Some nests are shaped much like birds' nests and are higher than the surrounding soil. This suggests that some dinosaurs warmed their eggs just like birds do, by placing their abdomens over the eggs. While this may sound absurd, researchers have found dinosaur skeletons positioned over their eggs. But not every species did this -- others buried and abandoned their nests or, like reptiles, kept eggs warm by covering them with their throat or thorax.

So far, it has been difficult for scientists to determine whether dinosaurs emerged from their eggs ready to fend for themselves, like reptiles, or required extensive parental care, like birds. A six-year study of 80-million-year-old egg fossils at the University of Leicester determined that at least some species were self-sufficient when they hatched [source: Science]. But fully-developed embryos from other species were too small or awkward to survive without help. Researchers have even found adult dinosaur skeletons surrounded by the skeletons of their offspring [source: Trinity-Stevens].

There's also a lot to be learned about dinosaur reproduction. No one is sure whether dinosaurs exhibited mating rituals or competed for mates. However, some species appear to be sexually dimorphic -- they have different qualities between the sexes. For example, in a ceratopsian species, males might have a bony neck frill that's shaped differently than females' frills.

Dinosaurs clearly had little trouble reproducing, though -- they dominated the landscape for more than 100 million years. Humans, on the other hand, have existed for far less than one million years. But in spite of their prevalence, dinosaurs became extinct about 60 million years ago. Next, we'll look at the theories behind why this happened.