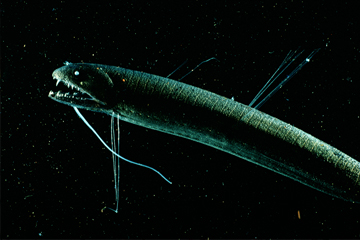 Sure, we know about you, Bathophilus, but how many deep-sea buddies of yours have we humans never laid eyes on?
Peter David/Getty Images

Considering that we don't know how big space is (or even if there's just one universe), we can say with reasonable certainty that we probably know more about the ocean than we do about the cosmos.

But don't click away yet, because that doesn't really get to the point at hand: Our knowledge of the ocean -- when compared to our knowledge of the space we know and can explore -- is shockingly thin. Consider that we've sent 12 people to the moon since 1969 over a handful of missions; only three people have descended to the deepest part of the ocean in the Marianas Trench [source: Thar]. (And note that one of them was filmmaker James Cameron, who reportedly spent $10 million of his own money to finance the undersea craft [source: Broad].) Even more shocking? The ocean takes up about 71 percent of Earth's space, yet a whopping 95 percent of that ocean is completely unexplored [source: NOAA].

However that number is a bit misleading. The entire ocean floor has been mapped, but only to a resolution of 5 kilometers (3 miles). (That means that we can see any features larger than 5 kilometers.) That doesn't mean we've explored or even seen the entire floor, even with instruments; the job is done by using radar to measure the sea's surface, giving us an idea of where bumps and dips in the ocean floor lie. It's a pretty cool feat, but the maps of the ocean floor still aren't as detailed as maps of the planets around us. If you consider how much of the ocean floor we've really seen and can report on, we're talking 0.05 percent of the ocean, mapped with the highest resolution of sonar [source: Copley].

It begs the question: Why does space seem to be a bigger target for exploration than the ocean? Part of the answer comes down to ease of exploration. Sure, it's hard to get a spaceship, or even a probe, into space. But it's also not an afternoon lap swim to get a person to the bottom of the ocean, where the pressure of 50 jumbo jets rests on you [source: Stillman]. And remember that in space, you've got the benefit of actually seeing stuff: The ocean is dark and hopelessly murky. Getting a light down there that can shine far enough to see anything is no easy task.

So perhaps we do understand more about the space we know than the ocean we live with, but that doesn't mean we've got either area tied up and figured out.

Is Permafrost Really, Well, Permanent?
It Takes a DJ: Healthy Reef Sounds May Lure Fish to Damaged Reefs
Why Are Whales So Big?