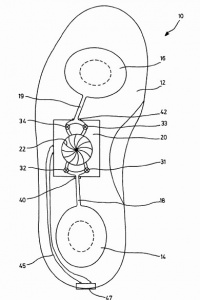 The basic idea of hydropower is to use the power of a moving liquid to turn a turbine blade. Typically, a large dam has to be built in the middle of a river to perform this function. A new invention is capitalizing on the idea of hydropower on a much smaller scale to provide electricity for portable electronic devices.

Inventor Robert Komarechka of Ontario, Canada, has come up with the idea of placing small hydropower generators into the soles of shoes. He believes these micro-turbines will generate enough electricity to power almost any gadget. In May 2001, Komarechka received a patent for his unique foot-powered device.

There's a very basic principle to how we walk: The foot falls heel-to-toe during each step. As your foot lands on the ground, force is brought down through your heel. When you prepare for your next step, you roll your foot forward, so the force is transferred to the ball of your foot. Komarechka apparently noticed this basic principle of walking and has developed an idea to harness the power of this everyday activity.

There are five parts to Komarechka's "footwear with hydroelectric generator assembly," as described in its patent:

As a person walks, the compression of the fluid in the sac located in the shoe's heel will force fluid through the conduit and into the hydroelectric generator module. As the user continues to walk, the heel will be lifted and downward pressure will be exerted on the sac under the ball of the person's foot. The movement of the fluid will rotate the rotor and shaft to produce electricity.

"With the increase in the number of battery-powered, portable devices," the patent reads,"there is an increasing need to provide a long-lasting, adaptable, efficient electrical source." Komarechka expects that his device will be used for powering portable computers, cell phones, CD players, GPS receivers and two-way radios.

For more information on hydropower plants and related topics, check out the links below.