What are natural gas hydrates? 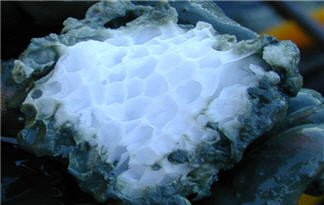 Natural gas hydrates are ice-like structures in which gas, most often methane, is trapped inside of water molecules. Unlike the ice we’re all familiar with that’s derived entirely from water, gas hydrates are in fact highly flammable, a property that makes these crystalline structures both an attractive future energy source as well as a potential hazard.

Hydrates are a much more abundant source of natural gas than conventional deposits. According to the U.S. Geological Survey, global stocks of gas hydrates range account for at least 10 times the supply of conventional natural gas deposits, with between 100,000 and 300,000,000 trillion cubic feet of gas yet to be discovered.

If these sources of natural gas could be safely, efficiently and cheaply tapped into, gas hydrates could potentially displace coal and oil as the top sources of the world’s energy. But that’s a big "if."

Because of the depths at which these potential energy sources can be found, information is lacking regarding composition and volume of gas hydrates and different sites. Scientists believe that these hydrates tend to form along continental fault lines and have inferred sites where large supplies of natural gas hydrates can be found. This means that any effort to tap into this energy source is hampered by not knowing exactly where to look, what energy suppliers could expect to find or even the best way to exploit the resource.

According to an article by AFP written over the summer, Japan, a nation currently dependent on foreign suppliers of fossil fuels to meet its energy needs, will conduct the world’s first-ever offshore extraction of deep-sea hydrates, with plans to conduct the first drilling tests in 2013. In Canada, technology originally designed in Japan was first used to extract methane from gas hydrates in permafrost in 2008.

These efforts are just preliminary research, however. Large-scale commercial operations meant to exploit gas-hydrate deposits are at least a decade away.

The Dangers of Hydrates

On the evening of April 20, 2010, a bubble of methane gas, derived from gas hydrates in the depths of the Gulf of Mexico, rose up the drill column of the Deepwater Horizon oil rig, expanded as it came closer to the surface and exploded. A total of 11 workers, two engineers and nine of the rig crew, died as a result of the explosion. Five months past before the oil spill was contained, which created one of the worst environmental disasters in U.S. history.

As evidenced by the tragedy that occurred on the Deepwater Horizon rig, methane hydrates can be volatile and already present a danger to existing deep-sea oil drilling operations. Although oil companies used to shun deep-sea drilling around sites with gas hydrates, drilling into these areas has become an industry-wide practice over the last 10 to 15 years, as reported by Discovery News’ Eric Niiler, and could lead to more of the kinds of disasters of the Deepwater Horizon variety.

And that’s just on existing rigs. Drilling operations intended to extract methane from hydrates would have to cope with the volatile nature of the gas and its expansion as it rises to the surface from a high-pressure to low-pressure environment.

Finally, methane is a greenhouse gas. Although it could lead to clean-burning energy, methane that escapes into the atmosphere is even worse for the environment than carbon. To not only avoid an environmental catastrophe but also ensure an efficient extraction operation, any efforts to tap into gas hydrates as an energy source would have to minimize leaks.