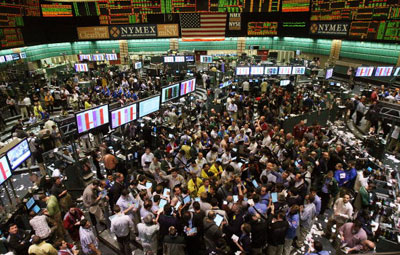 Traders on the New York Mercantile Exchange on Feb. 20, 2008 — the day crude oil topped $101 per barrel for the first time ever.
Mario Tama/Getty Images

Many oil analysts and researchers believe that we humans have reached the point at which the amount of conventional oil available throughout the world has reached decline. This is called peak oil. Since oil is a nonrenewable resource, the supply is limited. Not everyone agrees that we've reached peak oil yet (some believe it's a century or more away), and there are even a few researchers debating that new oil technology will catch up before we run out of oil completely [source: CERA].

Since we've become so d­ependent on technology that is powered by petroleum products — from the gas that runs your car to life-saving pharmaceuticals — more unconventional sources of crude oil are being investigated. One of the more promising reserves of oil that hasn't been commercially exploited yet is oil shale. This is essentially oil trapped in solid form within rock.

One hundred million years ago, a wide swathe of sea cut the North American continent into eastern and western portions. As sea levels lowered, this sea receded, leaving in its wake inland seas and lush grasslands. The Tertiary-period organisms that lived and died here became fossilized. As millions of years passed, these remains were subject to high temperatures and gravitational pressure and were converted into petroleum. But the conditions that created liquid petroleum in other areas of the world weren't quite as strong or long-lasting. These conditions resulted in oil shale. Think of oil shale like liquid crude oil that made it through every stage of development, save the last part that converted it into a liquid. It's up to energy scientists to finish the process.

This is no small feat, though. Find out about the oil shale extraction process next.