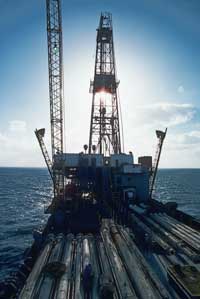 You can send shock waves down to the ocean floor all day, but ultimately you're going to have to drill a little if you want to know if you have a potential gusher on your hands. To handle this job, oil companies send out a mobile drilling platform to perform exploratory drilling on a site. Some of these platforms are ship-based, but others have to be towed to the drilling site by other seagoing vessels.

­An exploratory drilling rig will typically drill four temporary exploratory wells over a suspected deposit, each taking 60 to 90 days to complete. Geologists initially drill to obtain a core sample. The principle is the same as if you stuck a hollow cylinder into a birthday cake and then removed it. You'd then be able to examine the cylinder to discover what varying layers of icing and cake existed inside the cake. Will there be ice cream? This is one method of finding out without cutting yourself a whole slice.

Of course, oil geologists aren't hoping for ice cream. They're looking for signs of petroleum, which they call a show. Once a show has occurred, drilling stops and geologists perform additional tests to make sure oil quality and quantity are sufficient to justify further action. If so, they then drill additional wells to substantiate the findings.

Once geologists have established the worth of a petroleum deposit, it's time to drill a production well and begin harvesting the riches. An average well lasts a good 10 to 20 years before it's no longer profitable, so offshore production platforms are built with a long stay in mind. The platforms are typically fixed directly to the ocean floor using either metal and concrete foundations or tethering cables. As you might imagine, the platform has to remain as stationary as possible during all this drilling, no matter how severe the weather becomes.

One platform can boast as many as 80 wells, though not all of them go straight down. Directional drilling allows oil platforms to sink production wells into the ocean floor at an angle in order to reach deposits miles away from the drill site. If you've seen the 2007 film "There Will Be Blood," then you may know this as the "I drink your milkshake!" method. In the film, a maniacal, mustached oilman boasts that, through directional drilling, he's managed to drain all the oil beneath a nearby parcel of land. This issue also arises in the offshore drilling industry. For instance, in ­California, the state is authorized to drill new wells if it can prove that wells in adjacent federal waters are draining California-owned oil deposits.

Even after its wells have run dry, offshore production platforms often find renewed life as a central hub for other nearby oil platforms. The other platforms pipe petroleum over for processing and/or storage.

­So you've sunk millions into erecting your oil rig. Now it's time to get busy drinking that offshore milkshake.