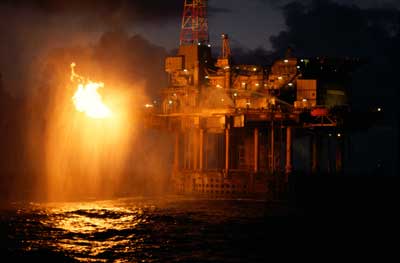 Once the drill hits petroleum, a final bit of casing called a production casing goes down to the bottom of the shaft. This section of casing terminates in a solid cap, closing the well off from the surrounding petroleum reservoir. It may seem a bit odd to seal up the prize once you've finally reached it, but the goal isn't to just vent pressurized oil and gas up to the surface, but to control its flow. Engineers send down explosives to perforate the production casing at different depths to allow petroleum into the well. This allows the oil and gas to reach the surface under less pressure, and not as a blasting geyser.

Initially, the natural pressure from the subsurface petroleum reservoir is sufficient to push fluids and gas to the surface. Eventually, however, this pressure declines, and the use of a pump or injections of gas, oil or water are required to bring the ­petroleum to the surface. By adding water or gas to the reservoir, engineers are able to increase reservoir pressure, causing the petroleum to rise again. In some cases, compressed air or steam is sent down a well to heat the remaining petroleum, which also increases pressure.

If what came up from the wells was pure petroleum, it would just be a matter of barreling it up at this point. But this isn't usually the case, and it's why offshore drilling platforms often boast full production facilities as well. The liquid that rises up to the platform is a mixture of crude oil, natural gas, water and sediments. Most oil refinement takes place onshore, but oil companies sometimes use converted tanker ships to treat and store oil at sea. This process removes unwanted substances from the oil, prior to refining.

­Natural gas falls into two categories: wet and dry. Wet natural gas contains various vaporized liquids, and these have to be filtered out before it can be transported elsewhere. Dry natural gas, on the other hand, is free of these pollutants. At this point, undersea pipelines and oil tankers transport the separated oil and natural gas to onshore storage and treatment plants.

Eventually, a well will either run dry, or the costs of further development will outweigh potential future profits. When this happens, petroleum companies plug and abandon the well. At this point, operators remove platforms from their moorings -- with explosives if need be -- and either relocate them or drag them back to shore for scrap. Divers then cut the well casing off below the surface of the ocean floor and seal it in with concrete. In some cases, however, portions of the oil rig remain and are slowly overtaken by sea life.

In the next section, we'll take a look at the various kinds of oil platforms in use today.

Despite our culture's dependence on petroleum, not everyone's a huge fan of offshore oil drilling. Criticism ranges from dire environmental warnings to concerns over how oil rigs obstruct the view on a holiday beach trip. To learn more, read Why is offshore drilling so controversial?