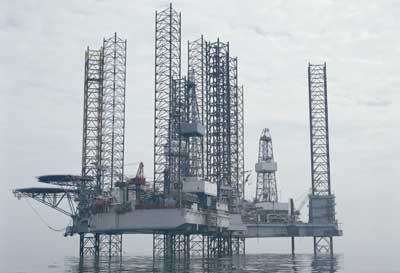 A jack-up rig can raise and lower itself on three or four massive "legs." Oil companies float these structures out to a drill site and then lower the legs until they touch the sea floor and elevate the rig out of the water.
Malcolm File/Photodisc/Getty Images

During the exploratory drilling phase, the goals are simple: Get in, find out if there's oil and then move on to the next site. If a location proves prosperous, then the company can bring in a more permanent structure. But for the months it takes a crew to size up a location, a mobile drilling platform provides everything a team needs with minimal investment. Jack-ups, the most common rigs, typically cost between $180 million and $190 million to build [source: Offshore Magazine]. There are five varieties of mobile drilling platforms.

Drilling barge: Mostly used for shallow drilling in non-ocean waters, thise platform is exactly what it sounds like: a floating barge with drilling equipment. Tugboats tow the platform out to the site, where anchors hold it in place. However, given that drilling barges basically just float on the surface, they're only suitable for calm waters.

Jack-up: This rig resembles a drilling barge, but with one exception. Once this platform reaches the drilling site, it can lower three or four massive legs into the water until they touch the bottom. At this point, they lift the platform out of the water. This provides a much more stable environment from which to drill, as the legs stabilize the platform against winds and lift it above pitching waves. The design has its limits, however, as deeper waters require impractically large legs.

Submersible rig: This drilling platform combines some of the properties of drilling barges and jack-ups. Only in this case, the production facilities are elevated on stilts hundreds of feet above pontoonlike barges. After reaching the drill site, the crew floods the barges with water. The barges sink until they rest on the sea or lake floor, while the platform remains elevated above the water on stilts. In effect, the crew sinks the rig into order to anchor it. When the time comes for the rig to relocate, the crew pumps the water back out of the barges, causing them to float back up to the surface and push the stilted platform back up into the air. Like the jack-up, this platform is limited to shallow waters.

Semisubmersible rig: This platform is much like a submersible rig, except it's designed to work in much deeper waters. Instead of sinking until its lower hull rests on the seafloor (which, in deeper waters, would drown everyone), it simply lets enough water in to lower it to appropriate operating heights. The weight of the lower hull simply stabilizes the drilling platform, while massive anchors hold it in place.

Drill ships: This is essentially an oceangoing vessel with, you guessed it, a drilling platform in the middle. The drill string extends down to the ocean floor through a moon hole. Drill ships operate in very deep water and often have to ride out rough sea conditions. They use dynamic positioning equipment to keep aligned with the drill site. This equipment uses satellite information and sensors on the subsea drilling template to keep track of the drilling location. Using this data, electric motors on the underside of the hull constantly move the ship to keep it lined up with the well.

­When it's time for these temporary platforms to move on, the really big rigs enter the picture. On the next page, we'll take a look at the different types of offshore production platforms.