by Maria Trimarchi
Prev NEXT
3 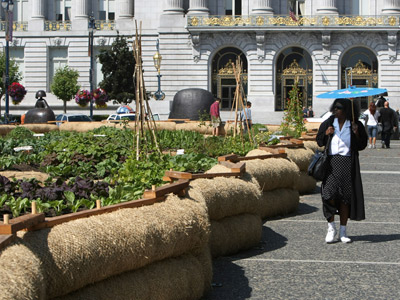 Organic food is great when it will be eaten locally -- the case for this San Francisco City Hall garden. But it isn't the environmentally friendly default many believe it to be.
Justin Sullivan/Getty Images

­Which came first? The chicken or the egg? These days, it ­seems that's not the only chicken riddle we have to solve while food shopping. Were the chickens treated humanely? Were they kept free-range? Are these eggs from organic, cage-free birds?

Choosing organic fruits, vegetables, dairy and meats is smart. While there's no definitive ev­idence that organic foods have any significant nutritional benefits over conventional foods, they must be produced without antibiotics, growth hormones, and synthetic pesticides and fertilizers. This lowers your exposure to potentially toxic substances. And because organics are grown and produced using sustainable, regenerative farming methods, they're good for the soil and good for the planet.

Except when they aren't.

Organic foods are only good for the planet when they're not trucked, shipped or flown around the world before landing at their final destination. Food miles are the distance your food has traveled from farm to store. The idea is the higher number of food miles traveled, the greater amount of energy consumed and pollution released -- both of which contribute to the problem of global warming. On average, most of our meals have traveled about 1,300 miles (2,092 km) before they arrive on our table [source: ATTRA]. Think about it: How did fresh strawberries get to your local store in the middle of winter? In 2005, the total amount of fruits and vegetables that were flown into California alone released more than 70,000 tons of CO2­­, the same amount of pollution produced by 12,000 cars on the road [source: National Resources Defense Council].

­What to do? Choose locally grown foods -- and, even better: locally grown organic foods. Visit your farmers' market or join a local CSA (community supported agriculture) group, and you're guaranteed to get foods that have taken the road less traveled.