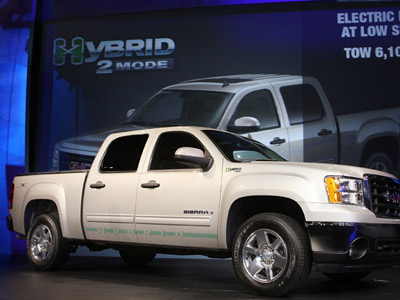 If you have to drive a truck, a hybrid may be your most eco-friendly option. But an oversized hybrid is no comparison to a standard compact car.
Scott Olson/Getty Images

The ­recent rapid spike in gas prices may have you thinking about trading in your gas-guzzler for a hybrid. Since it's estimated that hybrids cut greenhouse gas emissions by more than one-third compared to many non-hybrids, that's hardly a bad decision [source: Natural Resources Defense Council]. But a little research before you buy could lead you to the used car lot instead.­

First, consider the amount of energy needed to make a new car. To make a new Toyota Prius, or a new gas-only vehicle for that matter, roughly 113 million BTUs of energy are used -- that's equal to 1,000 gallons (3,785 liters) of gasoline [source: Wired].

Also consider gas consumption. Small hybrids are some of the most fuel-efficient cars on the roads, and not all hybrids are equal. Some gas-only used cars may actually have smaller carbon footprints. Take, for example, large hybrid SUVs and trucks. Sure, they're made with hybrid technologies but their gas mileage doesn't measure up against some of the conventional fuel-efficient compact cars on the market. A gas-only Honda Fit gets an estimated 33 mpg compared to the estimated 27 mpg of a hybrid Toyota Highlander [source: Edmunds].

­The smart choice depends on what type of car you need, as well as your driving habits. For people who really do need to own a truck or large car, swapping a gas-only model for a hybrid is potentially a better option. But if, like many of us, you're hauling nothing more than you and your family around, consider your options. Or you could always trade your car in for a bike, assuming you could pedal enough to offset the initial carbon footprint associated with making the bike.