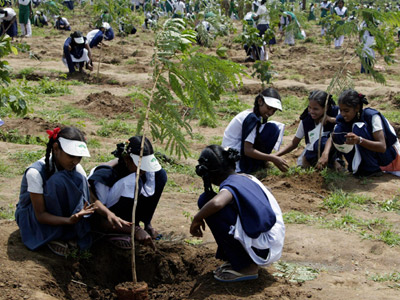 The value of forestry offsets depends on where they're planted, among other factors.
Noah Seelam/AFP/Getty Images

­Forests have a three-pronged effect on our climate: They cool the air through the process of evapotranspiration; they reduce air pollutants (including CO2, a known greenhouse gas) through photosynthesis; and their dark, dense leaves absorb sunlight that warms the planet.

Most people are familiar with the idea that trees and vegetation help to defend our planet against global warming. However, recent scientific studies show those benefits depend on where those trees are planted. Plant in the wrong part of the world and you may be wasting time and money.

Forests in the tropical belt around the equator benefit the planet. They absorb CO2­, in a process called carbon sequestering, which helps lower temperatures. It's the forests outside of the tropics that may have little or no impact on climate change.

The farther away from the equator forests are, the more likely they are to trap heat in their dense canopies, raising temperatures. This is known as the albedo effect. In a study conducted by the Lawrence Livermore National Laboratory, Carnegie Institution and Université Montpellier II, scientists found that forests in mid-to-high latitudes could increase temperatures by up to 10 degrees F (5.5 degrees C) in the next 100 years than if those forests were not there [source: Lawrence Livermore National Laboratory].

While supporting forestry projects remains a popular carbon offsetting option, it's important to be smart about which programs you back: Helping to mitigate the effects of tropical deforestation is a sound choice. And you can't go wrong when you keep your community green and beautiful by planting saplings around your neighborhood.

­­It's always admirable to choose to make your life greener -- especially when you do a little research beforehand. Each step we take as individuals, no matter how small, helps add up to a healthier planet.