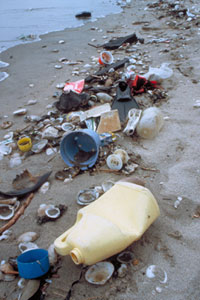 Unlike this beached plastic, the tiny particles that make up the Great Pacific Garbage Patch aren't within easy reach.
Photo courtesy California.gov

The floating dump that lies about 1,000 miles (1,600 kilometers) north of the Hawaiian islands has pretty much just sat there, getting bigger since ocean researcher Captain Charles Moore stumbled on it in 1997 [source: Stone]. (That's actually not that bad considering how much we haven't done about global warming in the 30 or 40 years that issue's been on the books.) In the last few years, though, several organizations have stepped up their focus on the Garbage Patch and what to do about it.

The first group to pay close attention to the mass of trash accumulated by a vortex of swirling ocean currents -- or gyre -- was formed by Charles Moore himself. Shocked by his discovery, he started the Algalita Foundation in 1999 with the primary purpose of studying the garbage patch. Algalita researchers take samples from the patch by dragging a net through it. They analyze each sample for plastic content in the water and plastic toxicity in the fish they catch. In one catch, they found 84 pieces of plastic in the gut of a rainbow runner [source: Hoshaw]. In all, their research shows the plastic content of the ocean is increasing steadily [source: Hoshaw].

While shedding light on the problem certainly opens the door to solving it, the Algalita Foundation isn't taking steps toward a cleanup. In that area, a group from the Ocean Voyages Institute called Project Kaisei has taken the lead, proposing a rather innovative cleanup solution.

The plan is pretty simple on its face -- dredge the plastic out of the water using nets and turn it over to recycling companies. Seems easy enough. The next potential step is rather ambitious: turn the trash into fuel. Using a process called pyrolysis, the plastic would be heated in a vacuum to a temperature above 550 degrees F (260 degrees C), at which point it would start to break down into its components [source: Stone]. Those components could then be processed into oil.

The biggest draw of the plan is its double-solution mentality: We have too much trash, not enough fuel and a feasible way to kill both birds.

The biggest problem with the plan is that most experts believe it's impossible.