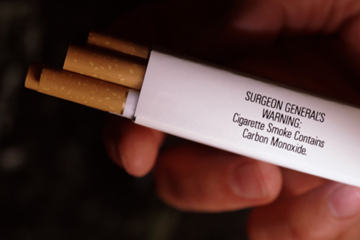 One Terror Management Theory study suggests that the old, death-neutral smoking warnings may prove more effective than those that point out smoking can lead to premature death.
Joseph Devenney/Getty Images

In the 2009 study of health warnings on cigarette packages, the people who were more likely to report wanting to smoke after being shown death-related messages about smoking were the ones who tied their self-esteem to their smoking habits. In a prior exercise, the participants had filled out a questionnaire that correlated their self-esteem to smoking.

These findings support the field of psychology called Terror Management Theory (TMT). This field, created in the 1980s by psychologists at the University of Missouri, is based on the work of anthropologist Ernest Becker, author of the seminal work "Denial of Death." Becker concluded that because humans are aware of the impending demise of all living things, including ourselves, we construct culture and its trappings to distract us from becoming obsessed with our inevitable death. In Becker's view, everything from politics to televised sports to celebrity to war is created by humans in an unconscious effort to create meaning in life.

Terror Management Theory transfers Becker's anthropological ideas into the field of psychology and standardizes them. Under TMT, humans cling to the cultures they identify with most to stave off their preoccupation with death. When faced with the reminder of one's demise, a person combats the attendant terror by clinging more strongly to that culture or group that constitutes the person's identity, a process called distal defense [sources: Cox and Ardnt, Greenberg, et al]. In other cases, a proximal defense is triggered, and a person will downplay the seriousness of any threat to his or her mortality [source: Greenberg, et al]. This may be the mechanism at work with climate change messages.

The reminders of mortality associated with alarmist climate change messages can trigger proximal defenses. When these defenses are triggered, even those who agree that climate change is real would move to diminish the potential danger of climate change; those who disagree would likely disagree even more strongly [source: Dickinson].

If Terror Management Theory explains how counterproductive alarmism can be when it comes to climate change, then the media should avoid the threat of death, chaos and destruction in favor of a more pragmatic approach. Unfortunately, we see reminders of our impending death in the media every day, provoking alarmist responses. Almost as soon as the pragmatic approach adopted the compact fluorescent light bulb (CFL) as the symbol of how every individual can make a real, collective contribution toward fighting climate change, news reports emerged warning of the physical dangers posed by the mercury found in CFLs.