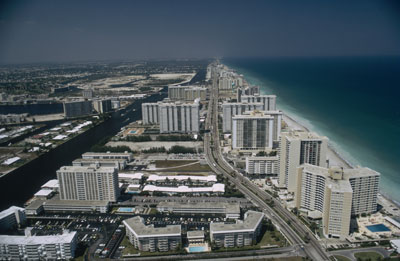 Coastal cities, such as Miami, enjoy certain advantages by having access to the ocean. They also face certain challenges, including exposure to hurricanes.
Hulton Archive/Getty Images

The goal of planning is to guide the development of a city or town so that it furthers the welfare of its current and future residents by creating convenient, equitable, healthful, efficient and attractive environments. Most urban planners work in existing communities, but some help develop communities -- known as new towns, new cities or planned communities -- from scratch. Either way, urban planners must consider three key aspects of a city as they map out their programs:

The physical environment: A city's physical environment includes its location, its climate and its proximity to sources of food and water. Because drinking water is so crucial, many cities are founded at the head of a river or at the fall line, the point where rivers descend from the regions of older, harder rocks toward the softer sediments of the coastal plain. The rapids that often form at the fall line mark ideal locations for towns and villages to evolve. Coastal cities also have a great advantage in that their accessibility positions them to become important trading centers.

Planners must often consider an area's geologic history to understand the full character of a city. For example, the physical environment of New York City and the surrounding region reflects the culmination of a billion years of geologic activity. Over this great span of time, mountain ranges formed and were worn away. Seaways came and went. Most recently, episodes of continental glaciation covered the area with ice sheets that eventually retreated. All of this activity makes New York City what it is today and affects how it might change in the future.

The social environment: The social environment includes the groups to which a city's residents belong, the neighborhoods in which they live, the organization of its workplaces, and the policies created to impose order. One of the biggest issues in most cities is the inequitable distribution of resources. For example, more than 50 percent of the population of Mumbai and New Delhi (cities in India) live in slums, while in Lagos and Nairobi (cities in Africa), more than 60 percent of households aren't connected to water [source: United Nations Human Settlements Programme]. As a result, the social environment can be a risk factor for disease and mortality as much as individual risk factors.

Planners work with local authorities to make sure residents are not excluded from the benefits of urbanization as a result of physical, social or economic barriers.

The economic environment: All cities work hard to support the retention and expansion of existing local businesses. Primary employers, such as manufacturing as well as research and development companies, retail businesses, universities, federal labs, local government, cultural institutions, and departments of tourism all play strong roles in a city's economy. The programs of an urban planner should encourage partnerships among public agencies, private companies and nonprofit organizations; foster innovation and competitiveness; provide development opportunities and resources to small businesses; and nurture, preserve and promote local arts and creative industries in order to sustain a city's cultural vitality.

As you can imagine, urban planners must do a great deal of research and analysis to fully understand how the physical, social and economic aspects of a city interact. Before they ever put pen to paper, they study:

They also gather input from residents, government officials, politicians, business executives and special groups. Armed with all of this information, planners develop short- and long-term strategic alternatives for solving problems in a coordinated and comprehensive manner. They also show how these programs can be carried out and how much they will cost.

All of these details are captured in a formal document known as a comprehensive plan or a master plan. In the next section, we'll take a look at a typical plan.