How Masdar City Will Work 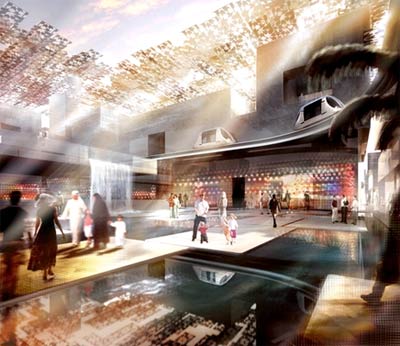 When completed, Masdar City will be a bustling and productive city. Notice the futuristic PRTs on the elevated track that will replace cars as personal transporation.
Foster + Partners

Although the climate for the site of the future city is hot, it's also sunny, which architects see as the biggest source of energy for the city. They plan to build a solar thermal power plant [source: Walsh, Gunther]. The city will be skyscraper-free, and photovoltaic (PV) arrays on building rooftops will also collect sunlight for power. A desalination plant that will provide fresh water to the city will use solar power as well. The city will also use energy from a $2 billion hydrogen power plant. Hydrogen, a clean source of energy, produces much fewer carbon dioxide emissions than most fossil fuel processes used today.

To keep energy needs low and the city cool, designers plan to orient the city and its structures to take full advantage of natural sea breezes. A wall encompassing the city and wind towers for buildings will contribute to protecting the population from the harsh desert climate. In addition, taller buildings will shade the city's narrow walking streets. If the city's structures use sustainable technologies, and energy demand is reduced 70 percent because of those technologies, then it will be easier for the city to survive on alternative energy resources. The city hopes to save $2 billion in oil after 25 years [source: New York Times, Masdar].

Efforts to conserve water in the city involve plans to recycle at least 80 percent of the water used [source: New York Times]. Recycled gray water, such as water from sinks and showers, and treated waste water will irrigate the landscape. Through these processes, the city planners hope to reduce water consumption by 60 percent [source: BBC].

How does a community of 50,000 people produce no waste? The answer lies in composting and recycling materials. To keep trash from ending up in a landfill, much of the waste will end up in a compost pile, where bacteria will decompose the material. Otherwise, recycling will be a high priority for the city.

There will be no cars in Masdar City to contribute to the release of carbon dioxide. Supposedly, people living and working in Masdar City will never be farther than 656 feet (200 meters) from transportation [source: Wordsworth]. An electric-powered light rail on elevated tracks will allow easy transport between Masdar City and Abu Dhabi. To get around the city, people can utilize personal rapid transit pods, or PRTs. These vehicles will run on magnetic tracks using electric power.

If you're excited to see how this city will turn out, remember it won't be completed until 2016. However, builders hope to finish the first of the seven phases of the project, the Masdar Institute of Science and Technology, as soon as 2009. To learn more about sustainable building techniques, investigate the links below.