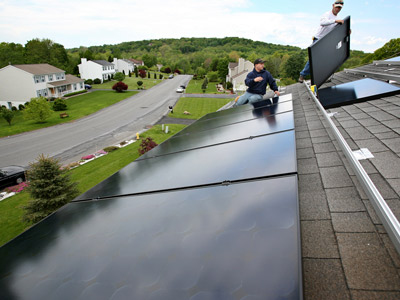 Unless you like the idea of hoisting yourself onto the roof, an automatic system might be a good investment.
AP Photo/Craig Ruttle

Photovoltaic (PV) solar energy is an efficient and renewable energy source -- PV systems use crystalline silicon or thin film (although more materials are being developed) to convert sunlight into electricity without producing air pollution or hazardous wastes. Fossil-fuel-fired power plants, however, produce much more than electricity. In 1999, for example, roughly 2.2 billion tons (1.9 billion metric tons) of carbon dioxide, 12 million tons (10 million metric tons) of sulfur dioxide and 7 million tons (6.3 million metric tons) of nitrogen oxides were the side effects of fossil-fuel-generated electricity [source: Leahy]. How does that compare to PV-produced electricity? Each kilowatt of PV-generated energy offsets 830 pounds (376 kilograms) of nitrogen oxides, 1,500 pounds (680 kilograms) of sulfur dioxide and 217,000 pounds (98,429 kilograms) of carbon dioxide annually [source: U.S. Department of Energy].

PV systems are flexible, filling power needs ranging from the low demand of a cell phone, camera or single home to the high demand of a city or town. Installing a PV system to power your home will run you thousands of dollars (or less depending on the level of power you want) [sources: The Solar Guide]. Solar companies have only recently hit their industry target of $1 per watt (when you use 1,000 watts for 1 hour, that's a kilowatt-hour) [source: Kanter]. By contrast, the average price for fossil fuel-generated electricity in the United States is 11.26 cents per kilowatt-hour for consumers, and the average American home uses 10,656 kilowatt-hours (kWh) per year [sources: LaMonica and Johnson].

Installing a PV system is a big investment, for sure, but one that's worth the price -- both financially and environmentally. But to keep your system in tip-top condition and performing at its peak levels. Solar panels require a good scrub from time to time, kind of like windows.