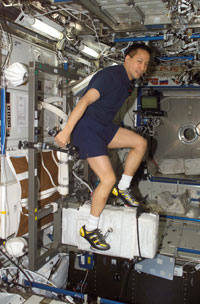 Astronaut Edward T. Lu exercises on the Cycle Ergometer with Vibration Isolation System (CEVIS) in the Destiny laboratory on the International Space Station (ISS). Why are astronauts onboard the ISS working out all the time? See more astronaut pictures.
Image courtesy NASA

When people on Earth decide to start working out, they do so for several reasons. We exercise to keep our hearts healthy, tone muscles, reduce stress or lose a little weight. For astronauts living in an environment like the International Space Station, however, exercising isn't a matter of choice -- it's a necessity. They need to keep moving in space for all of the above reasons and more.

If you sneaked a peak at one of the daily schedules for the International Space Station, you'd notice a lot of exercise. Although the schedules are always different and each day requires several different tasks -- one day might be full of interviews with magazines and television programs, another day might include a spacewalk to fix a part of the station -- there are four things astronauts will always do during their stays. Along with eating, sleeping and calling home to talk with family members, exercise is one of the most important activities in an astronaut's busy day. In fact, astronauts receive as much as four hours of exercise in a 16-hour period.

Why are astronauts on board the ISS working out so much? Aside from keeping fit and staying on top of their game, the main reason astronauts work out during trip into outer space is because they suffer from a condition similar to osteoporosis, a disease that results in a significant amount of bone loss. But wait -- aren't astronauts in the peak of health? How does being in space eat away at your bones?

Why does living in space affect our bodies differently, and what can astronauts do about it? Will dumbbells do the trick, or do they need something more? To learn about why astronauts need to stay pumped up in space, read the next page. 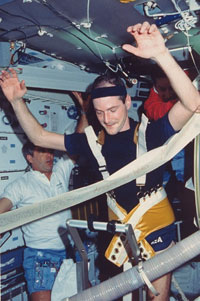 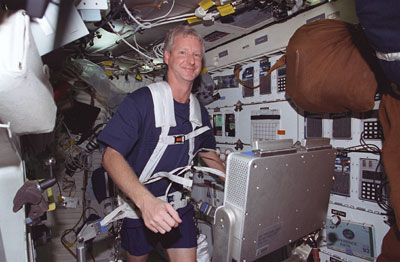