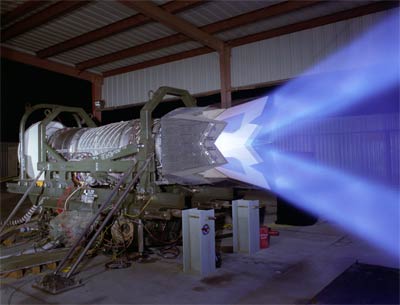 At the rear of a jet engine, a nozzle directs the flow of hot exhaust gases out of the engine and afterburner. Usually, the nozzle points straight out of the engine. The F/A-22's nozzle, on the other hand, is the first vectoring nozzle. That means the pilot can move, or vector, the nozzle up and down by 20 degrees.

The gases coming out of the vector nozzle help push the airplane's nose up or down. This vectoring increases the roll rate of the plane by 50 percent, making it much more maneuverable than other fighters.

Thrust vectoring is built into the flight control system, so it works automatically in response to commands from the pilot. When the pilot turns the aircraft, the nozzle moves in the desired direction along with the elevator, rudder and aileron control surfaces. The latter three surfaces are common to all airplanes:

With the vector nozzle, the F/A-22 has a fourth type of control surface.

The F119 engines also give the F/A-22 a high thrust-to-weight ratio. That means the engines can actually handle many times the airplane's weight, allowing the plane to accelerate and maneuver very quickly.

Next, we'll talk about the amazing electronics that make the F/A-22 seem like a flying video game.