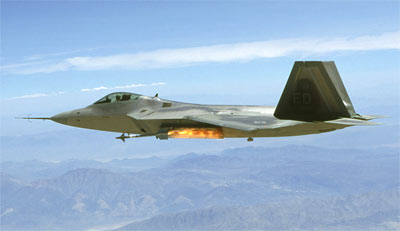 All of this technology serves one purpose: to deliver the F/A-22's weapons to the target.

Like other stealth aircraft, the F/A-22 can carry weapons inside the fuselage. The main weapons bay can carry six radar-guided AIM-120C medium-range air-to-air missiles. If the mission includes ground attack, two 1,000-pound GBU-32 Joint Direct Attack Munitions replace four of the AIM-120Cs. Two small bays on each side of the aircraft hold two heat-seeking AIM-9 Sidewinder short-range air-to-air missiles. Hidden behind a stealth door above the right air intake is the M61A2 20-mm multibarrel cannon. It holds 480 rounds of 20-mm ammunition and feeds the gun at a rate of 100 rounds per second.

When stealth is not a requirement, the F/A-22 can carry weapons and fuel tanks under the wings.

Langley Air Force Base in Hampton, VA, was the first to operate the Raptor in late 2004. It is scheduled to remain in service through 2040.

For much more information on the F/A-22 and other military aircraft, check out the links below.