Flying Video Game: Behind the Scenes 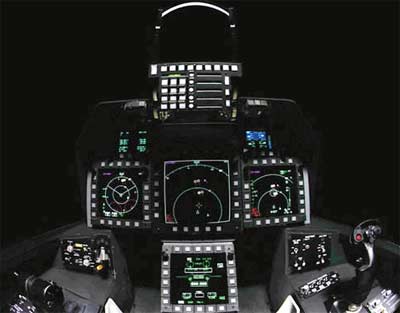 A modern fighter pilot relies on electronics and instruments to fly and to find and fight the enemy. Traditionally, those two systems have been separate in the cockpit, forcing the pilot to manage all the information separately.

The F/A-22's system was designed to let one crewperson handle the workload found in two-seat aircraft such as the F-14 Tomcat and the F-15 Strike Eagle. Its avionics systems are the first to integrate radar, weapons management and electronic warfare systems into the overall flight system.

Behind the scenes are two common integrated processor (CIP) units, the brains of the system. The size of a large breadbox, these units process all information for sensors and weapons. Currently, only 75 percent of the CIP's capacity is used, so it can easily take on more duties as computing requirements in the cockpit grow. There is space for a third CIP to be installed, allowing for 200 percent growth in capability overall.

The cockpit is designed to help the pilot use the information at hand to make decisions quickly in the heat of battle.