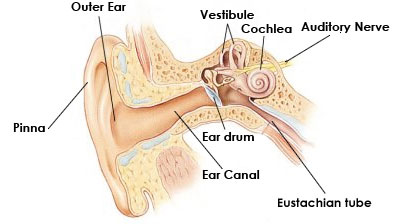 Sound travels in mechanical waves. A mechanical wave is a disturbance that moves and transports energy from one place to another through a medium. In sound, the disturbance is a vibrating object. And the medium can be any series of interconnected and interactive particles. This means that sound can travel through gases, liquids and solids.

The bell's vibrations push and pull against adjacent air

Sound isn't restricted to moving through the air. Press your ear against a solid surface like a table and close your eyes. Tell someone else to tap his or her finger on the other end of the table. The tapping becomes the initial disturbance. Each tap sends vibrations through the table. The particles in the table collide with each other and become the medium for the sound. The particles in the table collide with air particles between the table and your eardrum. When a wave moves from one medium to another like this, it's called transmission.

The air particles collide with your ear's tympanic membrane, also known as the eardrum. This sets off a series of vibrations in several structures inside the ear. The brain interprets these vibrations as sounds. The whole process is pretty complex. You can learn more in How Hearing Works.

So, sound needs a physical medium in order to travel anywhere. Is there enough physical material in space to act as a medium for sound waves? Find out in the next section.

The Speed of Sound

The speed of a sound wave depends upon the medium through which it travels. In general, sound travels faster through solids than through liquids or gases. Also, the denser the medium, the slower sound will travel through it. The same sound will travel at a different speed on a cold day than it would on a warm day.