by Nicholas Gerbis
Prev NEXT
7

He Had a Loose Fuse or Two 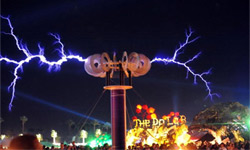 Who cares if he had a loose fuse! He invented the Tesla coil, for goodness' sake.
Jeff Kravitz/FilmMagic/Getty Images

For good or ill, quirkiness is a quality we associate with genius, and Tesla does not disappoint.

Some say Tesla constructed his greatest inventions, including his induction motor, entirely within his own mind. Unlike Edison, who worked a problem through prototyping, trial and error and similar hands-on methods, Tesla found that key solutions sometimes came to him in blinding flashes of insight [sources: Cheney and Uth; Jonnes].

By his own account, Tesla suffered from visual and auditory hallucinations, as well as hypersensitivity to vibrations and strong light [sources: Chandrasekhar; Pickover]. He also feared round objects, such as women's pearls, and fixated on the number three [sources: Jonnes; Pickover].

The inventor also suffered a progressive germ aversion and eventually limited his diet to boiled foods. This phobia reportedly arose after a scientific colleague showed him unboiled water under a microscope. Late in life, the aging scientist kept pigeons in his hotel room, but continued to dress as nattily as ever -- behaviors that led some to question his mental state [sources: Jonnes; PBS].

Tesla's peculiarities did not impair his socializing, however; reporters and friends described him as charming, humble and well-spoken.