by Nicholas Gerbis
Prev NEXT
6

He Has a Scientific Unit Named After Him 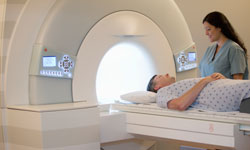 Tesla's eponymous SI unit can be used to measure stronger magnetic fields, like those of MRI machines.
Dana Neely/Getty Images

They don't just hand those things out like party favors, you know.

Tesla, like Carl Friedrich Gauss, lends his name to a unit of magnetic flux density in the International System of Units (abbreviated SI). A tesla can also be thought of as a unit of magnetic induction [source: Encyclopaedia Britannica]. At one time, high-frequency currents were known as Tesla currents [source: Houston and Kennelly].

One tesla equals one weber per square meter, or 10,000 gauss (hence, scientists often use gauss to measure weak magnetic fields, reserving tesla for stronger ones, like those used in MRIs). A weber is a unit of magnetic flux, which can be thought of as the amount of magnetic energy "flowing" over an area, such as the surface of a magnet.

Remember above when we described induction, and how changing magnetic fields can induce currents to flow in a conductor? One weber is the amount of this magnetic energy "flow" required to induce one volt of current in a loop of wire. Actually, it's a bit more specific than that: The definition assumes that you drop the flow, or flux, to zero at a uniform rate, and do it in one second [source: Encyclopaedia Britannica].

The weber is named for Wilhelm Eduard Weber, a German physicist known for his work in terrestrial magnetism and his invention in 1833 of an electromagnetic telegraph [source: Encyclopaedia Britannica].