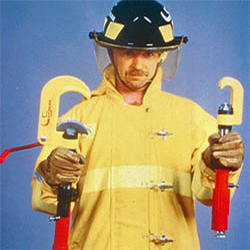 Let's hope those cutters he's holding don't need to rescue you from a tough spot you're in, but if they do, be sure to thank NASA.
Image courtesy NASA/Spinoff

After a NASA space shuttle trades Earth's atmosphere for the depths of the galaxy, it detaches itself from its rocket boosters. The technology responsible for making that flawless transition also boasts life-saving uses on the ground [source: Barrett].

Alongside Hi-Shear Technology Corporation of Torrance, NASA helped develop Lifeshears in 1994, a type of cutting equipment that comes in handy during emergency and rescue situations [source: Spinoff Magazine]. The invention's strengths draw from its reduced cost, weight and noise -- all of which place less stress on victims and rescuers when compared to large hydraulics and hoses required for previous operations. Instead, these shears are "pyrotechnically-actuated," meaning they draw a charge from a pyrotechnic reaction within the device's cartridge. It's the same concept NASA uses to separate shuttles from their booster rockets midair, except on a smaller scale.

Lifeshears have helped search-and-rescue teams save individuals trapped in wrecked cars or collapsed buildings. The invention loosened victims from dangerous debris immediately following the Oklahoma City bombing in 1995 and the 9/11 attacks on the World Trade Centers in 2001.

Up next: a tiny invention with large potential.