Browse the article Is there a link between intelligence and mental illness? 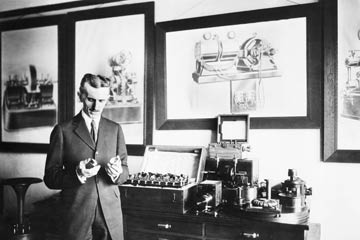 Nikola Tesla was so smart he could test and recalibrate an invention in his mind before he even built it. He apparently also suffered from OCD. See more pictures of famous scientists.
© Bettmann/CORBIS

Most mornings I power up the television, plug in the coffee maker and turn on my computer. After I've had my fill of forecasts, caffeine and e-mail, I head for the car. In the garage, I turn on fluorescent overhead lights. I push a button to unlock the car, another to open the garage door and still more as I tune the FM radio.

If I paid homage to the person who made it possible, Nikola Tesla's name would certainly be on my lips during the day's earliest hours. Tesla, a Croatian-born Serbian who became an American immigrant in 1884, invented many of the conveniences we still use today.

As much as Tesla was a genius, he was mentally ill. He didn't like to touch anything dirty or round, and he hated human hair. The actions of his daily life required divisibility by three: He used 18 napkins at each meal, only slept in hotels rooms assigned a number divisible by three and walked three times around a building before entering it [source: Bayne, Tesla Memorial Society]. If Tesla were alive today, he would probably be diagnosed with obsessive-compulsive disorder.

Turns out, the very spark that triggered Tesla's virtuosity may have been borne in mental illness. The same could be said of Italian Renaissance artist Michelangelo or American mathematician John Nash. Michelangelo would probably have been labeled autistic were he alive today; Nash's descent into schizophrenia was chronicled in the film, "A Beautiful Mind" [sources: Davis, PBS].

Whether it manifests as schizophrenia, depression, anxiety or anorexia, mental illness is a medical condition. It affects a person's thoughts, mood and daily life -- often negatively [source: National Alliance on Mental Illness]. Even so, mental illness has been part and parcel of some of the world's most creative minds. We'll explore why on the next page.

The Upside of Mental Illness

By 2012, as many as 30 scientific studies had been completed that uncovered links between creativity and mental illness, particularly disorders that affected mood [source: Hsu].

Researchers conducting one such study of Swedish teenagers discovered straight-A students were four times more likely to develop bipolar disorder, a mental illness marked by alternating moods of elation and depression, illustrating a correlation between intelligence and higher instances of mental illness. As the study subjects' emotional state transitioned from low to high, there was evidence of increased activity in the frontal lobe of the brain. This area is known for regulating creativity.

The study was expanded in 2012 to include more than 1 million participants, and researchers reported a link between artists, authors and scientists and the propensity to develop mental illness. Not only bipolar disorder, but a whole suite of mental illnesses, from drug abuse to anorexia nervosa and depression. A single gene, known as DARPP-32, is suspected to cause the link between intelligence and mental illness. A study found that people with schizophrenia were more likely to have the version of DARPP-32 that boosted performance on tasks involving thinking and filtering of information [source: National Institute of Mental Health].

Studies such as these could affect the way mental illness is understood and treated. If a scientist grapples with a bipolar disorder, but relies on the moments of brilliance that bubble up when depression transitions into mania, what is the best treatment? A medication that makes the majority of his days more bearable (and potentially keeps him from self-harm) or a behavior modification program that allows for feverish, singular obsessions? In some cases, a tandem approach is best, combining drug therapy with behavioral therapy to decrease stressful triggers or cognitive therapy to change thought patterns.

While some psychologists and researchers claim there's an "upside" to mental illness, one that produces bouts of creative and productive thinking, there is a clear downside, too. Untreated bipolar disorder, for example, can lead to substance abuse or suicide. If mental illness represents a classic case of risk versus benefits, it also is an intensely personal equation [source: Science Daily].

Of course, there's also the matter of opposing evidence. Some studies have shown no difference in IQ levels between those with bipolar disorder and those without it. Others indicate that greater acumen is a protective factor against the most psychotic illnesses and that low intellect is associated with developing, for example, severe bipolar disorder. A great deal of research is being carried out in this area, with the aim of fully understanding how this illness is linked to intelligence [source: Collingwood].

The Link Between Intelligence and Mental Illness 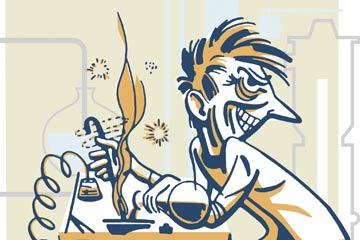 Is the stereotype of the mad scientist just a myth or is there some truth as well?
CSA Images/Snapstock/Getty Images

Despite its moniker, mental illness often has a biological component. Some researchers suspect it has to do with a person's inability to shut out stimuli. Selectively ignoring certain incoming sights, sounds and thoughts is a hallmark of the mentally healthy, a trait psychologists call "latent inhibition." For example, a study of nearly 200,000 20-year-old Finnish males found those with higher intelligence were more than 12 times more likely to develop bipolar disorder as they aged. The link, surmised researchers, was the capability to rapidly process information while problem-solving, a hyper-alertness thought to accompany some types of mental illnesses [source: Collingwood]. Turns out, the selective hearing your child or spouse develops when it is time to take out the trash may be a good thing.

On the other hand, biology could be behind a person's propensity for certain mental maladies. For example, researchers have discovered nerve cells in a portion of the brain called the posterior cingulate cortex become more active when monkeys explore potentially rewarding new courses of behavior instead of the normal routines. It is suspected that for people who have an obsessive-compulsive disorder compelling them to adhere to strict behavioral patterns, the flexibility to pursue new -- even potentially gratifying -- avenues is absent [source: Futurity].

And then there are those who defy their diseases. Although Tesla exhibited behaviors consistent with obsessive-compulsive disorder, his thought process was agile. Just as engineers now use computer models to construct a complicated apparatus, Tesla virtually tested and recalibrated every invention before ever building a single prototype. Only he did it entirely in his own mind!

Tesla's autobiography, in which he described his creative process, reveals that across hundreds of inventions, he never built a device that didn't work as he thought it would [source: Knapp]. The link between intelligence and mental illness -- even if we don't fully understand it -- often seems to be two sides of the same coin.

Author's Note: Is there a link between intelligence and mental illness?

When I began researching this article, I wondered how many of the world's historical geniuses would be considered mentally ill were they alive today? Turns out, probably many of them. From the suspected autism of Michelangelo, bipolar tendencies of Sylvia Path and depression of Abraham Lincoln, there are plenty of suppositions to be made. In the end, what I really found interesting was the connection between mental illness and intellect at either end of the spectrum. Both a high IQ and a low IQ are thought to protect against some forms of mental illness -- and potentially cause mental illness, too.