A Day in the Life of a Rover 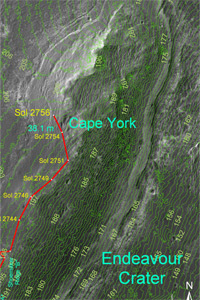 A map of Opportunity's travels on Sol 2756, or 2,756 days after it landed on Mars.
Image courtesy NASA/JPL/Cornell/University of Arizona

While the rovers aren't exactly punching a clock every morning, they do send images, along with instrument and status data, back to their Earth bosses.

Extrapolating from the data, the scientists send commands to the rover during the three-hour window of direct communication with the high-gain antenna. The rover is then on its own for 20 hours, carrying out commands and sending image data to the two overhead satellites. The rover's commanders may tell it to move toward a new rock, grind a rock, analyze a rock, take photos or gather other data with other instruments.

The rover and the scientists repeat this pattern for perhaps 90 days. At that point, the rover's power will start diminishing. Also, Mars and Earth will be getting farther and farther apart, making communication more difficult. Eventually, the rover will not have enough power to communicate, will be too far away or will run into mechanical failure, and the mission will be over

Our mission, however, is far from over. Let's take a trip to the next page where we'll learn all about the newest addition to the Mars exploration adventure.