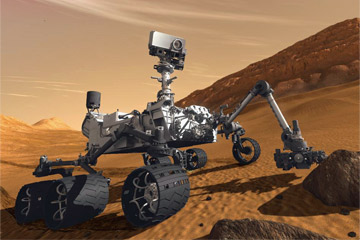 Illustrated here is one of the newest members of the crew roving Mars: Curiosity.
Image courtesy NASA/JPL-Caltech

In November 2011, NASA launched the Mars Science Laboratory, which is designed to study soil and rock for organic compounds or conditions that could help us understand if Mars is -- or ever was -- able to support "habitability" of life on the planet. The Mars Science Laboratory is actually a function of the rover Curiosity, which houses the scientific instruments that will collect and analyze samples.

In 2004, NASA selected a few different proposals for investigations and equipment to include on the laboratory. Along with the United States and Canada, Spain and Russia also have instruments on the mission. Spain is studying the Rover Environmental Monitoring Station, designed to survey the atmosphere and ultraviolet rays. Russia supplied the Dynamic Albedo of Neutrons instrument, which measures hydrogen below the surface of the planet, indicating water or ice.

A suite of instruments called Sample Analysis at Mars will analyze samples. (Creative naming is not generally a priority on scientific missions.) After the rover's arm scoops up the samples, a gas chromatograph, a mass spectrometer and a laser spectrometer will measure carbon-containing compounds and isotope ratios, which indicate the history of water on Mars. An Alpha Particle X-ray Spectrometer will measure the quantity of different elements.

You'll also find the following handy instruments onboard the laboratory:

But let's be honest: The coolest part of the Mars Science Laboratory is probably the ChemCam, which "uses laser pulses to vaporize thin layers of material from Martian rocks or soil targets up to 7 meters (23 feet) away" [source: Mars Science Lab Fact]. It will determine which atoms respond to the beam, while a telescope shows what the laser illuminates. They'll help the scientists determine what exactly they'd like the rover to travel to, or pick up. Beyond that, it's just supercool to have lasers on robots.

If you're still wandering the land hoping to learn more about our nearest planetary neighbor, navigate to the next page to learn lots more information about how intrepid Mars rovers work.