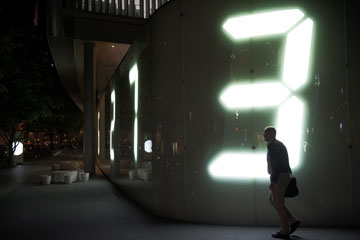 How do you relate to numbers?
Andrea Pistolesi/The Image Bank/Getty Images

Anyone who has ever fallen in love will tell you it's the little things about the other person that matter. The silly in-jokes shared at the end of the day. The peculiarities of the other person's morning coffee ritual. The way he or she lets old paperbacks stack up on the bedside table. Such interrelated details come to define us. They trace the undercurrents of our personality, and, to the observant and loving eye, they illuminate true beauty.

In the eyes of some, there is no finer beauty than that found in mathematics. They look at the world of numbers and, just as you'd never define your human beloved solely by his or her profession or hair color, the math lover sees beyond the mere function of numbers. The likes of 6, 28 and 496 turn into something more sublime than simple carriers of information. Independent of their usage, numbers become fascinating entities, and their mathematical relationships express the complexity of a vast system underpinning nature itself.

The study of those sometimes subtle and far-reaching relationships is number theory, sometimes referred to as higher arithmetic. Number theorists scrutinize the properties of integers, the natural numbers you know as -1, -2, 0, 1, 2 and so forth. It's part theoretical and part experimental, as mathematicians seek to discover fascinating and even unexpected mathematical interactions.

Now let's add another level of intrigue to this example. In some cases, we can add square numbers together to produce other squared numbers in what is called a Pythagorean triple, as they fit the Pythagorean theorem (a2 + b2 = c2). An example of this is 32 + 42 = 52, or 3, 4, 5.

Number theory involves analyzing such mathematical relationships, as well as asking new questions about them. But just what is a theory of numbers? What goes into formulating a proof, and why do some mathematical questions remain unanswered for centuries?

So, the world of math offers up numerous number types, each with its own particular properties. Mathematicians formulate theories about the relationships between numbers and number groups. They uphold their theories with axioms (previously established statements presumed to be true) and theorems (statements based on other theorems or axioms).

The first step in building a shiny, new, mathematical theory, however, is asking a theoretical question about number relationships. For example, can the sum of two cubes be a cube? Remember the Pythagorean triples from the previous page? These trios of three numbers, such as (3, 4, 5), solve the equation a2 + b2 = c2. But what about a3 + b3 = c3? Mathematician Pierre de Fermat asked the same question about cubes and, in 1637, he claimed to have worked out a mathematical proof that, via line after line of painstaking logic, showed beyond any doubt that no, the sum of two cubes can't be a cube. We call this Fermat's Last Theorem. Unfortunately, instead of providing the full proof in his notes, Fermat merely wrote, "I have a truly marvelous demonstration of this proposition which this margin is too narrow to contain" [source: NOVA].

More than three and a half centuries followed during which mathematicians around the world tried in vain to rediscover Fermat's proof. What was riding on this quest? Nothing, save academic pride and the love of pure, abstract mathematics. Then in 1993, with the aid of computational math undiscovered in Fermat's time, English mathematician Andrew Wiles succeeded in proving the 356-year-old theorem. Experts continue to dispute whether Fermat actually worked out such a phenomenal proof in his pre-computer age, or if he was mistaken.

Other questions in number theory related to various perceived or theoretical patterns in numbers or number groups. It all begins with that most crucial aspect of intelligent thought: pattern recognition. Brown University mathematics professor Joseph H. Silverman lays out five basic steps in number theory:

Fermat's Last Theorem, therefore, was really a conjecture for 356 years and only became a true theorem in 1993. Others, such as Euclid's Proof of Infinite Primes (which proves that prime numbers are limitless), has remained a solid model of mathematical reasoning since 300 B.C. Still other number theory conjectures, both old and new, remain unproofed.

Numbers are as infinite as human understanding is finite, so number theory and its various subfields will continue to captivate the minds of math lovers for ages. Old problems may fall, but new and more complicated conjectures will rise.

Explore the links on the next page for more information on mathematics.

For the most part, number theory remains a purely abstract area of mathematical study, but applications do exist in the field of cryptography, where number theory can create simple yet highly secure codes. Other fields of application include digital information processing, computing, acoustics and crystallography.

Mathematicians Solve Sum-of-Three-Cubes Problem for the Number 42
5 Things You Didn't Know About Autopsies
What Are the 7 Diatomic Elements?