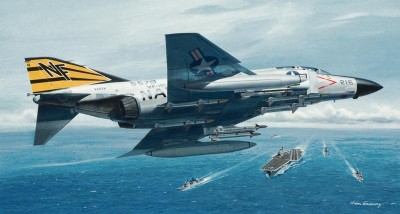 Land- or carrier-based, the McDonnell Douglas F-4 Phantom II flaunted speed, great climb, and altitude capabilities, and a fearsome array of armament. Versatility, too, was a strong point, for the Phantom filled many roles, from dogfighter to ground-attack jet.
m

During the Vietnam War, the McDonnell Douglas F-4 Phantom II would prove to be a better interceptor than the Convair F-106, a better ground-attack plane than the Republic F-105 (although loyal "Thud" drivers will protest this), a superb Wild Weasel defense-suppression aircraft, and a dogfighter able to use its power and energy to defeat more maneuverable opponents. The Phantom undertook reconnaissance and flew as a Fast FAC; its nighttime sorties in Laos were hair-raising in their danger.

The McDonnell Douglas (after the 1967 merger of the two corporations) Phantom became the principal fighter for the United States in Vietnam, serving the Air Force, Marines, and Navy. The North Vietnamese were equipped with capable MiG-21, MiG-19, and MiG-17 Soviet fighters, all of which proved to be difficult opponents under the rules of engagement of the Vietnamese War. However, the lightweight, maneuverable MiGs could be tamed by F-4s when using energy-maneuverability tactics, in which they traded speed and energy for altitude, enabling them to fight in the vertical plane.

The Phantoms' missiles (Sidewinders and Sparrows for the most part) had been designed for antibomber operations, and were difficult to use in a swift-turning dogfight. The problem was alleviated with minigun packs attached as pods, and was solved altogether when the McDonnell Douglas F-4E arrived on the scene with an internal gun.

The McDonnell Douglas F-4 Phantom II had its faults, including smoky engines and a hazardous, often fatal, stall-spin characteristic. Maintenance man-hours were high, and cockpit ergonomics were poor. In spite of all this, the F-4 was the best fighter in the West until the arrival of its successor, the McDonnell Douglas (now Boeing) F-15.

Ordnance: Up to 12,980 lbs of ordnance on four wing pylons