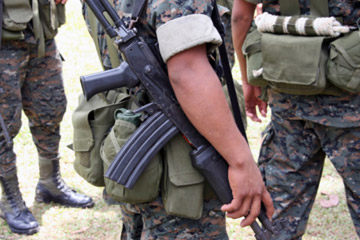 If you are an Army Ranger you have a good grasp of reconnaissance.
©iStockphoto/Thinkstock

The Army Rangers might be one of the most famous units in the Army, but like the rest of the Special Operations Command, we don't know too much about them. That's because the unit's missions tend to fall into three categories usually best kept secret: airfield seizures, special operations raids and urban combat. Recon is so important to the day-to-day activity of the U.S. Army that the Rangers have a detachment solely devoted to it -- the Regimental Reconnaissance Detachment (RRD). All Rangers are skilled in reconnaissance, but RRD is the cream of the crop when it comes to navigation and assessment skills [source: Go Army].

In general, Rangers played an integral role in Vietnam in collecting long-range intelligence in hostile territory [source: Lock]. Operating in well-concealed observations posts, the Rangers were often relied on to keep track of enemy movements in the jungles, where troops could easily slip through undetected.

Rangers operate in small teams of three to four men and spend their time gathering intelligence, surveying equipment and reporting troop actions. That surveillance enables them to call in air strikes on specific targets and relay up-to-date and accurate information to incoming troops and commanders. Often these detachments have orders to avoid confrontation at all costs and to move undetected to confirm or deny pre-existing intelligence.

While much of what they do remains behind closed doors, that doesn't mean the members of the RRD haven't received commendations. On Nov. 10, 2001, a detachment parachuted into a drop zone in Afghanistan in order to secure and establish a landing strip [source: Go Army]. This mission included a free-fall parachute run, as well as tactical deployment in a small area to secure an integral point for future missions, a pretty common trait among RRD jobs. Many of the RRD's missions have paved the way for successful troop actions, and it's not uncommon for Rangers to meet up with infantry and continue on their missions, meaning they need to be skilled in a wide variety of ways.

For lots more information on Army reconnaissance, Rangers and other military jobs, continue on to the next page.