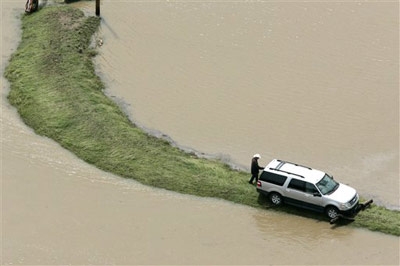 For three years, ending in the spring of 2007, the state of Texas experienced a terrible drought, the effects of which were felt throughout the state. In 2006, two million acres burned in wildfires. That same year, the drought caused $4.1 billion losses in state agriculture [Source: Time]. When a large storm system settled over the state in late May of 2007 and began to unleash rain, many Texans rejoiced that the drought was over. But then the rain continued. And continued. For 45 days, it didn't stop.

The record rainfall created rampant flooding and devastation in many parts of the state. All of the state's water basins filled to capacity, and many rivers and reservoirs flooded. The governor declared disaster conditions in 37 counties and dispatched the Texas National Guard. President Bush declared 17 counties federal disaster areas and dispensed $3.8 million in federal aid to house, feed and clothe residents as they repaired their homes and recovered belongings. Texas launched the largest search-and-rescue operation in the state's history. Hundreds of vehicles, National Guard troops, helicopters, boats and professional search-and-rescue workers (some from other states) scoured for survivors. At least 13 people died -- most of them drowned.

Some people compared the damage to that from Hurricane Rita. Ninety mile-per-hour winds struck Seminole, Texas. In parts of the state, trucks and trains were turned over. Mobile homes, bridges, entire front yards and small shops washed away. Businesses lost their inventories, and city infrastructure suffered significant damage. Many communities were evacuated, while hundreds of homes were completely submerged in water. People took to the nearest high ground they could find, scrambling onto roofs, trees and the tops of cars or into boats.

For many parts of the state, it was the worst weather in half a century. In some areas, eight inches of rain fell in an hour [Source: NPR]. In Marble Falls, northwest of Austin, what's called a rain bomb fell, dropping an estimated 18 inches of rain in three hours. A creek that was normally a few feet across exploded into a 100-foot-wide raging river. Officials raised concerns about contaminated water as well as surly fire ants and snakes that were flushed out of their homes.

Despite the devastation, the drought problem was solved. Water rationing ended. Boats that had been moored on dry lake beds now floated on lakes filled to the brim. Nutrient-rich waters and blooming vegetation began to provide a hardy supply of plankton for re­covering fish populations. Troublesome algae that thrived in low-water conditions started to decline. ­Finally, ranchers and farmers rejoiced as their pastures soaked in much-needed water.

After more than 40 days of rain, the scene seemed like something out of a disaster movie. What could cause such terrible storms to persist for more than a month and a half? Is this an isolated event or a sign of things to come? 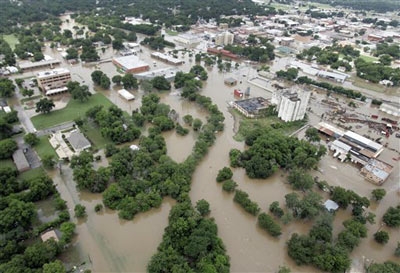 Floodwaters caused significant devastation across Texas. Much of the town of Gainesville was under water.
Image courtesy Tony Gutierrez/Associated Press

Several weather patterns converged to create the devastating rainstorms in Texas. A low-pressure system came from the Caribbean and absorbed warm water from the Gulf of Mexico. That then combined with an "upper-level trough" and another weather front. This moisture-filled system stayed in place and refused to budge, especially over south and west Texas. Stuck in place, the weather system dropped its moisture on the state in a deluge of rain.

While the Texas situation was dramatic and parts of the state experienced record rainfall, the event was not unique. Tropical weather patterns often cause massive rain storms, especially in parts of the world that go through monsoon seasons. The rain bomb that dropped on Marble Falls produced an estimated 18 inches of rain, but even that amount is far from a record. Dr. Steve Lyons, a weather consultant at the Weather Channel, blogged about the theoretical maximum rainfall possible for an area, producing the following numbers [Source: Weather Channel]

These are theoretical maximums, but Dr. Lyons' point is that the Texas rainstorms must be considered in perspective and that even the Marble Falls rain bomb is not a singular event.

Drought conditions have affected large parts of the United States in 2007, and average temperatures increased nearly everywhere in the U.S. from 1976 to 2005 [Source: Climate Prediction Center]. But it's interesting to note that average rainfall actually increased around much of the country during that same 30-year period -- by more than 1.5 inches in the areas experiencing the greatest increases.

Climate change will likely cause lake beds to dry up one year and refill the next.
Miguel Angelo Silva | Dreamstime

Whether climate change is responsible for this event is hard to say, but global warming is believed to be linked to an increase in extreme weather events such as drought and massive storms. The warming of the waters of the Gulf of Mexico is likely a factor. A study published by Indian scientists in December 2006 offers a clue. In that study, researchers found an increase in so-called extreme rain events in India during monsoon season from 1952 to 2000. However, the number of "moderate" rain events decreased, meaning that, overall, the average rainfall did not change significantly. Their research linked the increase in extreme rain events to "rising global surface temperatures" [Source: Science magazine].

In case you were wondering, the wettest place on Earth is under dispute, but several areas, such as the Indian village of Cherapunjee, can receive two months or more of nonstop rain. Some of Hawaii's volcanoes rarely emerge from rain clouds. Lloro, Colombia, has the highest annual rainfall, averaging 523.6 inches a year. In comparison, the wettest area of Texas, the Upper Coast region, averages about 46 inches of rain a year.

In addition to Texas, other areas of the U.S. and the world experienced severe weather in the first seven months of 2007. Floods coursed through Oklahoma and Kansas. Drought conditions caused fires throughout the country, including in Alaska, which is warming more quickly than anywhere on Earth [Source: The Independent]. A massive heat wave in the western U.S. contributed to the driest year in Los Angeles' history and to a fire in Lake Tahoe that burned 250 homes. A cyclone in Pakistan killed hundreds and left hundreds of thousands homeless.

The consequence of this severe weather may be that Americans are becoming more aware of the climate change problem. In late June 2007, the Pew Center in Washington, D.C., published a survey showing that the percentage of Americans who think that climate change represents a "major global threat" is 37 percent, up from 23 percent in an earlier poll.