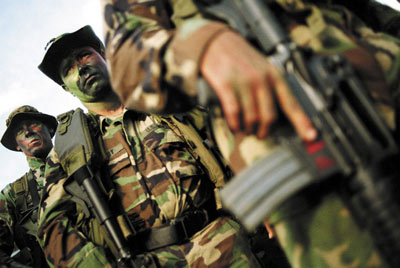 Like professionals in any other field, SEALs can only successfully do their jobs if they have the right tools. Their weapons, vehicles, and other gear can help them not only perform their missions, but also come out of those missions alive.

It isn't uncommon for SEALs to need clothing for varying temperatures and tasks. For example, when swimming to shore for a mission, the SEAL may need gear for extremely cold water temperatures as well as warmer land temperatures. For cold weather, clothing must prevent heat loss resulting from all sources, including radiation and evaporation. The SEAL must often generate heat through physical activity, and then vent it if he moves into a warmer location or begins to overheat due to extreme of exertion. Layering and ventilation allow for cooling and help keep perspiration from making clothing damp.

SEALs use handguns such as the 9mm SIG Sauer P226 and the MK23 MOD 0 45-caliber offensive handgun with a suppressor and laser-aiming module.

They use rifles such as the carbine automatic M4A1 5.56 mm and the AK-47. They also use shotguns, machine guns (MK43 and M2HB), and the HK MP5 9mm submachine gun series, among others. Add to that list sniper rifles such as the M88 .50 PIP and the M-14 sniper rifle, along with grenade launchers, mortars and AT4 anti-tank rockets, and SEALs can choose a weapon to fit the specific task at hand.