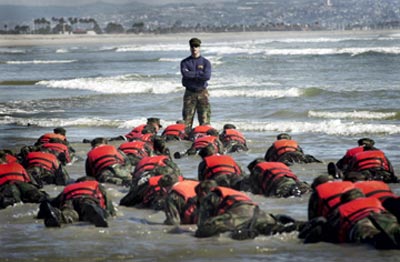 Hooyah! -- the war cry of the Navy SEALs -- becomes an automatic response for SEALs during the torturous SEAL training. While there may be other variations in meaning, "hooyah" generally means "yes," "understood," and "I'm not letting this evolution get the best of me." (Evolution is the term used for each event in the training schedule.)

SEAL training is brutal. It takes over 30 months to train a Navy SEAL to the point at which he will be ready for deployment. The SEALs that emerge are ready to handle pretty much any task they could be called on to perform, including diving, combat swimming, navigation, demolitions, weapons, and parachuting. The training pushes them to the limit both mentally and physically in order to weed out those who may not be able to successfully complete the demanding missions and operations with which SEALs are faced. The types of stresses they endure during BUD/S (Basic Underwater Demolition/SEAL) are the same stresses they will endure as SEALs. If they can't withstand it when lives aren't on the line, chances are good they won't be able to withstand it when lives are at stake.

From day one in SEAL training, trainees are taught the importance of teamwork. Focus is not on the individual. The fact that the SEALs have never left another SEAL behind on a mission is a testament to this belief system. Throughout their training, they learn more and more why teamwork is necessary in the type of work they will soon be entering: SEALs are performing tasks that may not be possible for a single man to accomplish, but can be possible for a team composed of men who have the same training and skills. Their success depends on what they can do together as a team.