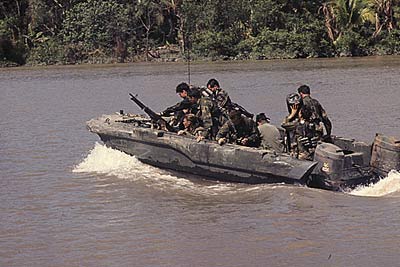 In 1941, after the Japanese bombed Pearl Harbor, U.S. troops were forced to invade Japanese territory by sea, often facing landmines and attacks from unseen enemies. As a countermeasure to these hazards, the U.S. Navy began creating teams that were specially trained to go safely ashore and clear the path of obstacles and other hazards and return intelligence on enemy locations. These teams of six men were called Naval Combat Demolition Units. Their training was heavy in physical strengthening and included carrying heavy loads, swimming, running, and maneuvering in small boats. Their training also included handling explosives. Eventually, they evolved into Underwater Demolition Teams (UDT).

The UDTs were organized in 1943. Also known as frogmen, they were responsible during the Korean War for swimming to shore before an invasion and blowing up obstacles in their path, clearing the way for the amphibious U.S. invasion. They also destroyed important targets like bridges and tunnels.

In the 1960s, the Soviet Union's ally, North Vietnam, was fighting against a U.S. ally, South Vietnam. President Kennedy wanted to send in small teams of guerrilla fighters to help South Vietnam. With the Army's Green Beret unit already set up, it was time for the Navy to create its own Special Operations unit. Building on the training of the UDTs, the Navy SEALs (an acronym for Sea, Air, and Land) were created. Their training readied them for the work ahead in the jungles, coasts, and rivers of Vietnam. Their task was to go behind enemy lines and raid enemy camps, sabotage supplies, cut off enemy communications, and destroy stored ammunitions. They were very successful in their missions.

With the Vietnam War ending without victory, many cuts were made in military spending, and the number of Special Forces units were in many cases cut in half. The success of the SEALs in Vietnam, however, proved their value.