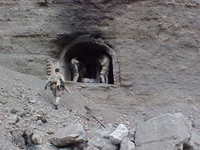 While we may hear about some amazing SEAL missions, most of what they do is off the radar. The few missions that do make the evening news, however, show us just how hard -- and how important -- the SEALs' jobs are.

On January 6, 2002, during Operation Enduring Freedom (2001-2003), SEALs were sent to the landlocked country of Afghanistan in search of Osama Bin Laden and other terrorists hiding in the caves of Zawar Kili. What was supposed to be a 12-hour mission turned into an eight-day mission.

SEALs and other SOCOM (Special Operations Command) operators searched more than 70 caves over a 3-mile-long ravine near the Pakistani border. Their search turned up caches of weapons, ammunition, supplies, and a wealth of intelligence information. They survived the unexpectedly extended mission on supplies they found in the al-Qaeda camps.

SEALs discovered a large cache of munitions in one of more than 70 caves explored in the Zhawar Kili area of Afghanistan.
Official U.S. Navy photo

According to Naval Special Warfare Command:

During Operation Enduring Freedom, Naval Special Warfare (NSW) forces carried out more than 75 special reconnaissance and direct-action missions, destroying more than 500,000 pounds of explosives and weapons; positively identifying enemy personnel and conducting Leadership Interdiction Operations in the search for terrorists trying to escape by sea-going vessels. NSW forces continue to operate in Afghanistan, routing out Taliban and other terrorist forces.

In the book Warrior Soul: The Memoir of a Navy SEAL, former SEAL Chuck Pfarrer describes how a mission to protect a U.S. Navy amphibious ship (at an undisclosed location) turned into the capture of would be-terrorists. As leader of his SEAL detachment, Pfarrer was responsible for securing the ship in port while its cargo of ammunition was unloaded.

After searching many fishing boats in the vicinity of the harbor, Pfarrer noticed a fishing boat coming into the area that didn't look like the others. He became suspicious and jumped into a Zodiac boat with two other SEALs, intending to search the slowly approaching boat. Maneuvering to prevent the boat from having access to the ship, they turned to face the boat head-on in order to force it to stop. Confirming their suspicions, the boat began increasing its speed.

After a brief struggle, they tied up the men on the fishing boat. Looking beneath the nets, they found two large bundles of Yugoslavian-made TNT taped together with fuses ready, along with two AK-47s. Explosives of this type are designed to punch holes in a ship's steel hull. The men in the fishing boat were combat swimmers preparing to attach these explosives to the anchored U.S. Navy ship.