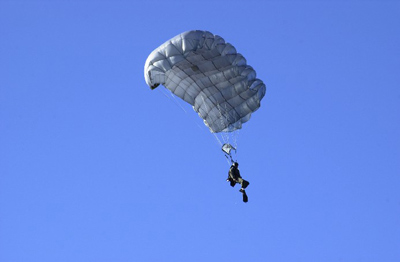 When BUD/S training is over, those remaining move on to basic parachute training at the Army Airborne School at Fort Benning, GA.

This training lasts for three weeks and is followed by SEAL Qualification Training (SQT). SQT is 15 more weeks of training to continue to improve basic skills and to learn new tactics and techniques required for assignment to a SEAL platoon.

It is after successful completion of the SQT that trainees are given their Naval Enlisted Code and awarded the SEAL Trident pin. They are now officially Navy SEALs.

Hospital corpsmen require another 30 weeks of training at this stage.

Further training is provided in Special Reconnaissance and Direct Action, where SEALs learn more about completing tasks such as:

New SEALs report immediately to their operational units and begin 12 to 18 months of extensive individual-, platoon-, and squadron-level training in preparation for deployment with their SEAL platoon. This training/deployment cycle is repeated to make sure SEALs are constantly improving and learning new skills that can save lives and help missions succeed.

In the following sections, we'll take at look at some examples of SEAL missions.