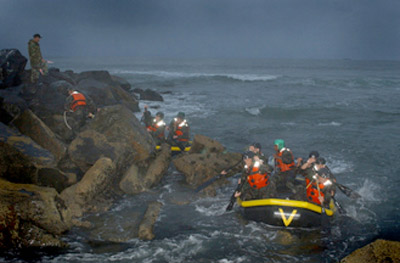 The fourth week of Basic Conditioning is known as Hell Week. This is when students train for five days and five nights solid with a maximum total of four hours of sleep. Hell Week begins at sundown on Sunday and ends at the end of Friday. During this time, trainees face continuous training evolutions. During Hell Week, trainees get four meals a day -- sometimes MREs, but usually hot meals of unlimited quantities. Eating hot food is a substitute for being warm and dry. It gives a needed psychological boost to tired trainees, many of whom are nearly sleeping while they eat.

Pretty much every evolution during Hell Week involves the team (or boat crew) carrying their boat -- inflatable rubber Zodiacs -- over their heads. Timed exercises, runs, and crawling through mud flats are interspersed throughout the five-and-a-half days. The largest number of trainees drops out during Hell Week. This extreme training is critical, though. SEALs on missions must be able to operate efficiently, oblivious to sub-zero temperatures and their own physical comfort. Their lives, as well as the lives of others, may depend on it.

Listening closely to orders is another critical element of training during BUD/S, particularly during Hell Week when brains are getting fuzzy from lack of sleep. The instructor may purposely leave out part of an order to see who is really listening. For example, during a series of orders requiring trainee teams to do exercises using a 300-pound (136-kg) log, he may leave out mention of the log for one order. Team leaders who are paying attention will catch this, and their team gets a small break in the difficulty of the task by performing it without having to carry the log. The instructor might reward the team by allowing it to stand by the fire and rest, or sit and sleep for a few minutes.