The Truth Behind the Rogue Planet Nibiru

Browse the article The Truth Behind the Rogue Planet Nibiru 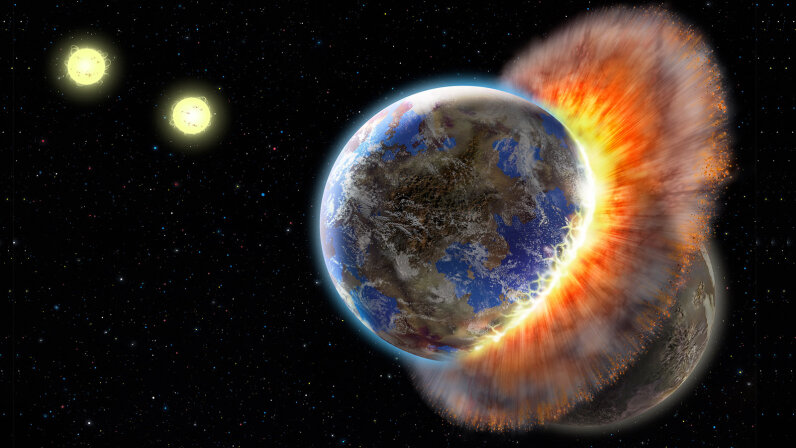 Many conspiracy theorists and doomsday prophets believe in the planet Niribu, and that its orbital path will eventually bring destruction to Earth. NASA

Doomsday prophecies can often find receptive ears. Sure they're grim, but for various reasons, some people actually take comfort in apocalyptic predictions. That doesn't, however, make these prophecies true. A lot of widespread ideas about end times rely on faulty science and nonexistent "evidence."

Take the Nibiru cataclysm. It's perhaps one of the worst doomsday offenders. Most believers say that Nibiru is a mysterious planet that orbits the sun, completing a new trip around the star every 3,600 Earth years. And supposedly, Nibiru is on a collision course with us. The story goes that Nibiru will someday crash into our home world or, failing that, get close enough to trigger a mass outbreak of natural disasters that'll end human civilization as we know it.

Don't worry; Nibiru is pure fiction. If it was real, there'd be traces of its gravitational influence all over the solar system. No such clues exist. Besides, any planet with Nibiru's alleged orbit likely would've kissed our sun goodbye ages ago, leaving mankind in peace.

Nibiru entered the public consciousness in 1976 with the publication of "The 12th Planet" by Zecharia Sitchin. We should note that Sitchin himself didn't believe Nibiru posed any immediate threat to mankind. On the contrary, he thought it was linked to the creation of our species. Yeah, there's a lot to unpack here.

The late Sitchin was a journalist and a student of Sumerian cuneiform — ancient writings of Mesopotamia and Persia mainly on clay tablets. Somewhere down the line, he became convinced that Homo sapiens are not the product of natural selection — at least, not entirely. According to his (questionable) interpretations of ancient Mesopotamian texts and inscriptions, the first humans were bio-engineered by some aliens called the Annunaki, who once colonized southeastern Africa.

Sitchin claimed these beings hailed from Nibiru, a hitherto-undiscovered planet. His writings state that Nibiru approaches Earth once every 3,600 years and then retreats to the depths of space.

"The 12th Planet" and Sitchin's follow-up books were never taken seriously by scientists or historians, but they sold millions of copies nonetheless.

As for Nibiru, it was destined to become an object of fear. Starting in the mid-1990s, the mythic planet was incorporated into a slew of doomsday theories. One psychic predicted that Nibiru would fly past us in the year 2003, causing mass destruction en route. Obviously, this didn't happen. But Nibiru kept making headlines.

Many proponents of the faux 2012 apocalypse thought Nibiru was going to strike Earth that December, vindicating their beliefs about the Mayan Long Count calendar. More recently, in 2017, some Christian fundamentalists declared that Nibiru or a similar object was fast approaching and would soon herald the apocalypse.

Let's take this opportunity to try and put some minds at ease. To recap, Nibiru supposedly has an orbital period of 3,600 Earth years. On its face, that claim seems plausible. After all, it takes the minor planet Sedna (which actually exists) an incredible 11,400 Earth years to finish one trip around our sun. But Sedna gives the sun a wide berth. Scientists use astronomical units, or AUs, to measure some of the vast distances in the cosmos. One AU is equal to about 93 million miles (150 million kilometers), which is the average distance between Earth and the sun.

Even at its closest point to the sun, Sedna is 76 AUs away from the life-giving star — putting it far beyond Neptune, Uranus and the much-maligned Pluto. Yet Nibiru is supposed to make regular forays into the inner solar system, which is the domain of Mercury, Venus, Earth and Mars.

Using these criteria, Bruce McClure at Earthsky.org calculated that the far end of Nibiru's orbital path would be about 469 AUs away from the sun. So in the span of 3,600 years, poor old Nibiru would have to travel all the way from planet Earth to this very distant location — and back. To stay on schedule, the planet would need a ridiculously narrow, almost stick-shaped orbit.

And it'd be moving really, really fast. As it passed by the Earth, we'd expect Nibiru to have a dizzying travel speed of 26.1 miles per second (42.1 kilometers per second). That spells trouble. A planet cruising at such a high velocity — and along such an unstable orbit — would be at risk of getting ejected out of the solar system entirely. Bye, Felicia!

The Gravity of the Situation

OK, so what would happen if Nibiru actually stayed the course and maintained its weird orbit around the sun? Well, if that were the case, we'd have found telltale evidence.

Long before Neptune was discovered in 1846, astronomers suspected there might be a large planet in its general vicinity. Why? Because observers noticed that Uranus — which was first sighted in 1781 — kept deviating from its expected orbit. Mathematicians hypothesized that this was because a nearby planet was influencing Uranus. Lo and behold, these predictions were spot-on. The mystery planet turned out to be the gas giant we now call Neptune.

Likewise, if Nibiru was real, its influence on the other planets in our solar system would be plain to see. And if — as many apologists claim — Nibiru was Jupiter-sized or bigger, that influence would be all the more obvious because massive planets exert strong gravitational pulls.

Today, all the planets from Venus to Neptune orbit the sun on the same general plane (give or take a few degrees). But according to astronomer David Morrison, if a Nibiru-esque body was careening past Earth every 3,600 years, its gravity would've driven at least some of those planets way off the plane — leaving them with severely tilted orbital pathways.

(Also, spare a thought for Earth's natural satellite. Nibiru would have presumably stolen our moon away by now.)

Finally, there's the issue of direct observation — or, more accurately, the lack thereof. Astronomers would be able to detect Nibiru several years before it reached Earth. And several months prior to the wayward planet's arrival, it'd shine brighter than some of the stars that are currently visible to the naked eye. But nobody's ever seen the prophesized planet, and there's no scientific reason to think that anyone ever will. The jury is in: Nibiru's just a hoax.

NOW THAT'S INTERESTING
On new age websites, the term "Planet X" is sometimes used interchangeably with "Nibiru." But they aren't synonyms. "Planet X" is a label that scientists occasionally give to theoretical planets (and similar bodies) whose existence has yet to be proven. Pluto once went by this title.