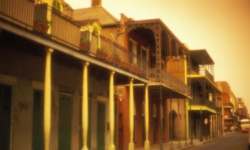 The French Quarter in New Orleans, La., is not short on spirits.
Eduardo Garcia/Getty Images

New Orleans, La., is a mysterious town. Walking the streets of the French Quarter, the ghosts of the Big Easy seem to be present at every turn. Maybe it has something to do with the architecture. Maybe it's the thought of a voodoo doll made in your image. Any way you slice it, New Orleans is a spooky city with many hotels and inns that boast otherworldly visitors. One of these is the Hotel Provincial.

A former soldier supposedly haunts the grounds of the Provincial. Guests have reported everything from doors opening and closing to hearing voices and footsteps when no one else was around. Several séances have been held in the hotel over the years, many of which produced ghostly visions and recorded audio of things like, "Tell Dianne I have to go." A female guest reported being pulled from her bed by a hand and dragged across the room while she kicked and screamed. Another conventioneer claims to have seen the soldier fully materialize in the closet, complete with decorated uniform, before disappearing into thin air.

So why does an Army ghost haunt the Provincial? A former military hospital sat on the same site in 1722. Twin houses took the place of the hospital in 1831 -- both burned down in 1874. Staying at the Provincial may not guarantee you a ghost sighting, but you'll definitely be spooked.