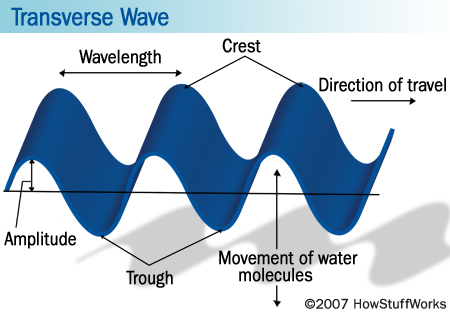 When most people think of waves, they think of water waves. But light and sound also travel as waves. A light wave, like a water wave, is an example of a transverse wave, which causes a disturbance in a medium perpendicular to the direction of the advancing wave. In the diagram below, you can also see how transverse waves form crests and troughs.

The distance between any two crests (or any two troughs) is the wavelength, while the height of a crest (or the depth of a trough) is the amplitude. Frequency refers to the number of crests or troughs that pass a fixed point per second. The frequency of a light wave determines its color, with higher frequencies producing colors on the blue and violet end of the spectrum and lower frequencies producing colors on the red end of the spectrum.

Sound waves are not transverse waves. They are longitudinal waves, created by some type of mechanical vibration that produces a series of compressions and rarefactions in a medium. Take a woodwind instrument, such as a clarinet. When you blow into a clarinet, a thin reed begins to vibrate. The vibrating reed first pushes against air molecules (the medium), then pulls away. This results in an area where all of the air molecules are pressed together and, right beside it, an area where air molecules are spread far apart. As these compressions and rarefactions propagate from one point to another, they form a longitudinal wave, with the disturbance in the medium moving in the same direction as the wave itself.

If you study the diagram of the wave above, you'll see that longitudinal waves have the same basic characteristics as transverse waves. They have wavelength (the distance between two compressions), amplitude (the amount the medium is compressed) and frequency (the number of compressions that pass a fixed point per second). The amplitude of a sound wave determines its intensity, or loudness. The frequency of a sound wave determines its pitch, with higher frequencies producing higher notes. For example, the open sixth string of a guitar vibrates at a frequency of 82.407 hertz (cycles per second) and produces a lower pitch. The open first string vibrates at a frequency of 329.63 hertz and produces a higher pitch.

As we'll see in the next section, the Doppler effect is directly related to the frequency of a wave, whether it's made of water, light or sound.