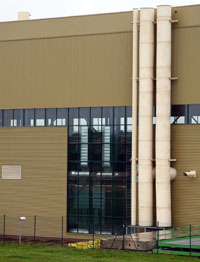 If theoretical particles, antimatter and dark energy aren't unusual enough, some scientists believe that the LHC could uncover evidence of other dimensions. We're used to living in a world of four dimensions -- three spatial dimensions and time. But some physicists theorize that there may be other dimensions we can't perceive. Some theories only make sense if there are several more dimensions in the universe. For example, one version of string theory requires the existence of no fewer than 11 dimensions.

String theorists hope the LHC will provide evidence to support their proposed model of the universe. String theory states that the fundamental building block of the universe isn't a particle, but a string. Strings can either be open ended or closed. They also can vibrate, similar to the way the strings on a guitar vibrate when plucked. Different vibrations make the strings appear to be different things. A string vibrating one way would appear as an electron. A different string vibrating another way would be a neutrino.

Some scientists have criticized string theory, saying that there's no evidence to support the theory itself. String theory incorporates gravity into the standard model -- something scientists can't do without an additional theory. It reconciles Einstein's theory of general relativity with the Quantum Field Theory. But there's still no proof these strings exist. They are far too small to observe and currently there's no way to test for them. That has lead to some scientists to dismiss string theory as more of a philosophy than a science.

­String theorists hope that the LHC will change critics' minds. They are looking for signs of supersymmetry. According to the standard model, every particle has an anti-particle. For example, the anti-particle for an electron (a particle with a negative charge) is a positron. Supersymmetry proposes that particles also have superpartners, which in turn have their own counterparts. That means every particle has three counter-particles. Although we've not seen any indication of these superpartners in nature, theorists hope that the LHC will prove they actually exist. Potentially, superparticles c­ould explain dark matter or help fit gravity into the overall standard model.

­How big is th­e LHC? How much power will it use? How much did it cost to build? Find out in the next section.

Everything You Know Is Wrong

Many of the scientists working with the LHC project readily admit that they aren't sure what will happen when the machine starts to work. That's because there's never been a particle accelerator as powerful as the LHC. The best any scientist can do is provide an educated guess. Several of the scientists also claim they'd be happy if the evidence the LHC generates contradicts their expectations, as that would mean there'd be even more to learn.