LHC by the Numbers 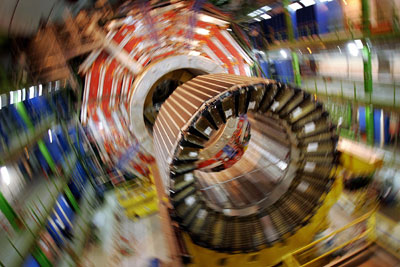 The Large Hadron Collider is a massive and powerful machine. It consists of eight sectors. Each sector is an arc bounded on each end by a section called an insertion. The LHC's circumference measures 27 kilometers (16.8 miles) around. The accelerator tubes and collision chambers are 100 meters (328 feet) underground. Scientists and engineers can access the service tunnel the machinery sits in by descending in elevators and stairways located at several points along the circumference of the LHC. CERN is building structures above ground where scientists can collect and analyze the data LHC generates.

The LHC uses magnets to steer beams of protons as they travel at 99.99 percent the speed of light. The magnets are very large, many weighing several tons. There are about 9,600 magnets in the LHC. The magnets are cooled to a chilly 1.9 degrees Kelvin (-271.25 Celsius or -456.25 Fahrenheit). That's colder than the vacuum of outer space.

Speaking of vacuums, the proton beams inside the LHC travel through pipes in what CERN calls an "ultra-high vacuum." The reason for creating such a vacuum is to avoid introducing particles the protons could collide with before they reach the proper collision points. Even a single molecule of gas could cause an experiment to fail.

There are six areas along the circumference of the LHC where engineers will be able to perform experiments. Think of each area as if it were a microscope with a digital camera. Some of these microscopes are huge -- the ATLAS experiment is a device that is 45 meters (147.6 feet) long, 25 meters (82 feet) tall and weighs 7,000 tons (5,443 metric tons) [source: ATLAS].

The LHC and the experiments connected to it contain about 150 million sensors. Those sensors will collect data and send it to various computing systems. According to CERN, the amount of data collected during experiments will be about 700 megabytes per second (MB/s). On a yearly basis, this means the LHC will gather about 15 petabytes of data. A petabyte is a million gigabytes. That much data could fill 100,000 DVDs [source: CERN].

It takes a lot of energy to run the LHC. CERN estimates that the annual power consumption for the collider will be about 800,000 megawatt hours (MWh). It could have been much higher, but the facility will not operate during the winter months. According to CERN, the price for all this energy will be a cool 19 million Euros. That's almost $30 million per year in electricity bills for a facility that cost more than $6 billion to build [source: CERN]!­

­What exactly happens during an experiment? Keep reading to find out.

What's Cooler Than Being Cool?

Why cool the magnets down to just above the temperature of absolute zero? At that temperature, the electromagnets can operate without any electrical resistance. The LHC uses 10,800 tons (9,798 metric tons) of liquid nitrogen to cool the magnets down to 80 degrees Kelvin (-193.2 Celsius or -315.67 Fahrenheit). Then it uses about 60 tons (54 metric tons) of liquid helium to cool them the rest of the way [source: CERN].